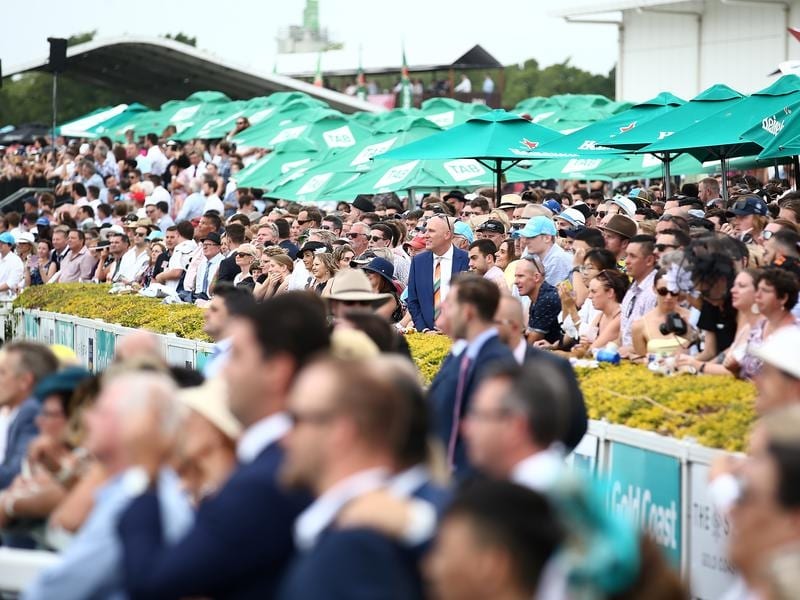 The Gold Coast club has coped with large crowds and unforeseen delays on Magic Millions day.

The Gold Coast Turf Club is delighted with the way it was able to handle one of its most extraordinary days.

Saturday’s Magic Millions meeting was thrown into chaos when an oil tanker overturned on the M1 connecting Brisbane and the Gold Coast.

The meeting was delayed by one race to accommodate the late arrivals and also because Champagne Cuddles was taken to a veterinary hospital after her race and officials had to wait for the horse ambulance to return to the track.

The Bjorn Baker-trained mare, the 1200m track record holder at the Gold Coast, was galloped on and has been retired.

The final race of the day was run in near darkness when a storm hit while patrons were leaving the course.

Many Brisbane-based racegoers took three hours to arrive home with the highway closed in both directions and alternate routes congested with traffic.

“We had about 24,000 patrons on course which is the biggest crowd in years. Things ran smoothly for them,” Lines said.

“I think we managed the racing side dramas well. The police were great to get the runners here and the stewards did the right thing in holding up the races.

“Hopefully, we will never get the same set of circumstances again but I think we showed we could handle it.”

The club is hoping its chances of staging its first Group One race will receive another shot in the arm with the likelihood of prize money upgrades for most races on Hollindale Stakes day.

The increase has been made possible by sponsorships from Aquis and the TAB.

There are five other stakes races set for Hollindale Stakes day on May 2 and Racing Queensland and the GCTC hope to be in a position to announce prize money boosts for them soon.

The Hollindale Stakes has been won by outstanding horses such as Rough Habit, Might And Power, Danewin, Shogun Lodge, Scenic Shot and Streama.

The GCTC has been hoping to earn an upgrade to Group One for the Hollindale which is a traditional lead-up to the Doomben Cup.