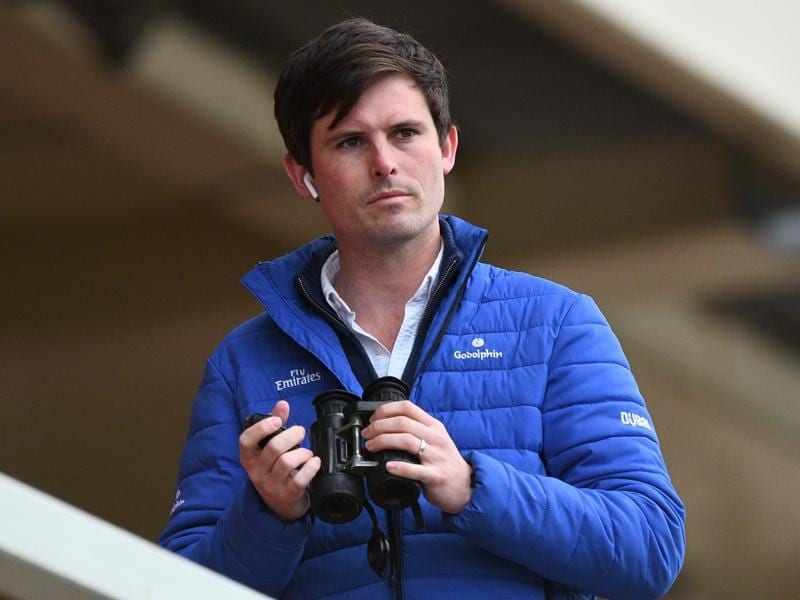 Trainer James Cummings has watched several of Godolphin’s horses work at The Valley.

Godolphin will be strongly represented in the Group One Moir Stakes with Trekking and Viridine and trainer James Cummings has not ruled out adding to the fire power by nominating three-year-old filly Exhilarates.

Cummings indicated it was more likely last season’s Magic Millions Classic winner would run against her own age and sex in Friday night’s Group Three Scarborough Stakes (1200m) at The Valley but he and the team would consider the Moir option.

The 1000m sprint has attracted 18 nominations including five Group One winners.

“We’ll have a talk about that,” Cummings said.

“She will be in receipt of the weight-for-age allowance in the Moir but she is only a filly. We’re no certainty to be running there.

“And when you’ve got a set weights option on the same night, the Scarborough, it would be nice for her to be lining up there as one of the horses to beat.

“She’s been one of the best three-year-old fillies in Melbourne in the early stages of the spring and there’s got to be something to be said for keeping her in the company that she can keep winning against and keep her confidence high.”

Exhilarates has won the Quezette Stakes at Caulfield and Atlantic Jewel Stakes (1200m) at The Valley so far this preparation.

Trekking, Viridine and Exhilarates all galloped at The Valley on Monday morning with Cummings there to oversee the hit-outs.

Five-year-old gelding Viridine was scratched from Saturday’s The Shorts in Sydney because of a wet track and was sent to Melbourne for the Moir.

Trekking runs for the first time since winning the Group One Stradbroke Handicap (1400m) in Brisbane in June and Cummings said he worked beautifully at The Valley.

“He’s had a really good preliminary before the Moir and it will be interesting to see how he goes over 1000 metres fresh,” he said.

“He’s going to be up against some talented five-furlong horses who are going to be pouring on plenty of pressure.

“So he’ll be smoking in behind them and hopefully he’s just within striking distance to be joining in and become competitive.

“I think he’s still got his tail in the air from that impressive win in the Stradbroke and I’d like to see him win fresh-up but the five furlongs will definitely be a challenge for him.”