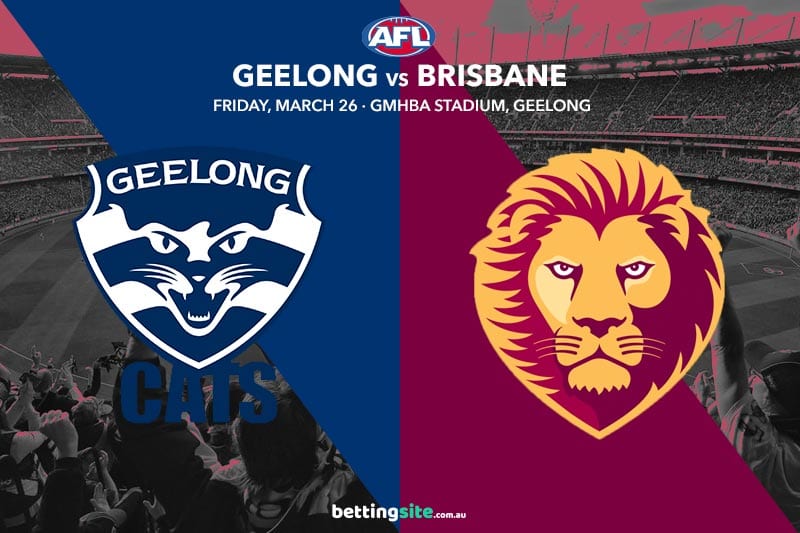 Two of the surprise losers from round one of the 2021 AFL Premiership season will seek redemption this Friday night as the Geelong Cats and Brisbane Lions clash at GMHBA Stadium.

Both sides went down in huge upsets last week, but that is the least of Geelong’s worries with Patrick Dangerfield facing suspension for a high bump and star recruit Jeremy Cameron set to miss time with a hamstring injury.

The Cats love their home-ground advantage in this matchup, as they have not lost to the Lions in their last 12 meetings at Kardinia Park.

Tom Hawkins has not kicked a bag of goals against the Lions in the past couple of seasons, largely due to the rise of Harris Andrews in the Brisbane backline. Last year’s Coleman Medallist kicked a career-high seven goals against the Lions in 2018, but since then he has kicked five goals in three clashes. With no Jeremy Cameron by his side, the pressure once again falls onto Hawkins, who has the capacity to win this game off his own boot if Andrews is not at his best.

The GMHBA Stadium advantage is not to be underestimated, as the Cats have consistently dominated the Lions on their home deck. Chris Scott’s men have booted over 100 points in their last eight matches at Kardinia Park, so keep that stat in mind when looking at the over/under of 170.5 total points at Sportsbet.com.au. Geelong loves going through the middle of GMHBA Stadium, and since the new man-on-the-mark rule encourages faster ball movement, the Cats should put on a show.

The Lions were cut apart in the forward half in round one, with the Sydney Swans taking 23 marks inside 50 compared to Brisbane’s five. Joe Daniher and Eric Hipwood must learn to play together if the Lions want to be successful this season, but against Geelong’s impressive back six, they will need to work overtime to make an impact. The midfielders should play well against the Dangerfield-less Cats.

Brandan Parfitt to get 20+ disposals

A strong player in congestion needs to fill the void left by Danger, and Brandan Parfitt is clearly the right man for the job. With Shaun Higgins and Isaac Smith on the outside, Parfitt’s tackling tenacity and quick hands will be huge in the contest. Parfitt had 18 disposals last week from 72% game time, but both of those numbers should rise considerably this week.

One of the pleasant surprises for the Lions last week was the impact Zac Bailey had in the first half. The emerging midfielder kicked the first two goals of the match and was explosive out of the middle. Brisbane Lions coaches expect a big jump from Bailey in 2021, and we got a small taste of it in round one. The quick midfielder has plenty of spunk and could hit the scoreboard early in Geelong.

Even though the Cats have historically destroyed the Lions at Kardinia Park, this contest could be much closer than usual. The absence of Dangerfield will not be easy for Geelong, especially against the reigning Brownlow Medallist, Lachie Neale. These sides played in the two highest-scoring matches in round one, so we expect another free-scoring affair.