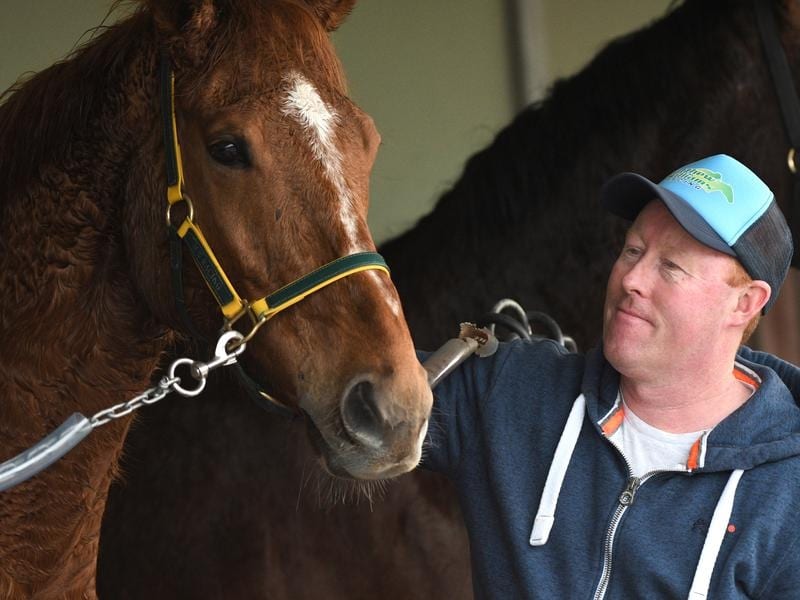 Trainer Matthew Williams is happy with G1 winner Gailo Chop after his barrier trial at Cranbourne.

Multiple Group One winner Gailo Chop has ticked another box in his comeback from injury, pleasing his trainer and jockey in his first of three scheduled barrier trials ahead of his return to racing.

Gailo Chop suffered a tendon injury and has not raced since finishing second to Winx in the Group One Queen Elizabeth Stakes at Randwick in April last year.

The nine-year-old gelding, now in the care of Matthew Williams, at Warrnambool had a gallop between races at Ballarat last week before stepping out in an 1190m-trial at Cranbourne on Monday with Mark Zahra aboard.

Gailo Chop bowled along second and took the lead early in the straight before being overhauled late by imports Sikandarabad and Neufbosc to finish third, beaten just over half a length.

“That was good. It was only a soft trial for him today,” Williams said.

“Mark said he surprised him a bit with how well he went, knowing he’s still got a fair bit to go.

“He has pulled up sound and his recovery seems really good. He’s only at about 80 per cent so he just did enough today.

“He’ll come back for the next two fortnights and have two 1500-metre trials and the second one will be a pretty solid trial.

“After that he will be ready to kick off in the Makybe Diva Stakes.”

Another Group One winner making a comeback is Humidor who has not raced since emerging from last year’s Cox Plate with an injury.

Now trained by Ciaron Maher and David Eustace, Humidor had a comfortable hit-out in the second heat of the morning over 990m.

He finished eighth in his heat with Group One-winning stablemate Kenedna just ahead of him.

“He’s in good order for where he’s at,” Humidor’s jockey Damian Lane said.

“It’s one step at a time with him because he’s coming off an injury and a long break. We don’t want to get ahead of ourselves but he’s doing everything right at this stage.