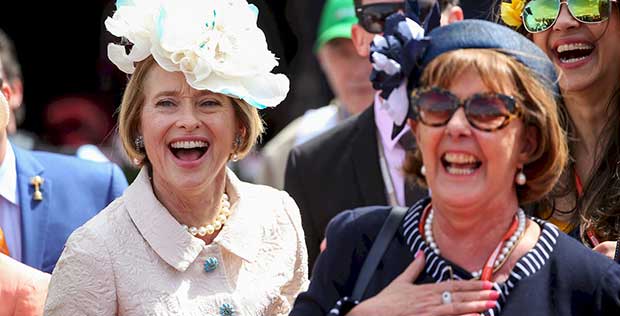 THE first lady of Australian racing, Gai Waterhouse, has taken out the first two races on Melbourne Cup day, after Invincible Star ($16 at WilliamHill.com.au) and Sort After ($4.80) went back-to-back for the champion trainer.

Invincible Star scorched the earth and the field to get the first win of the day for Gai, while Sort After kicked away after leading the field into the straight.

Co-trainer of the Waterhouse stable Adrian Bott said the team could not have dreamt for a better start to the day.

“We came here today hoping that it would be a good day, we thought we had some strong chances and so far it has panned out that way.” Bott said after Sort After’s victory in the second race of the day.

Bott was full of praise for the front running performance from jockey Stephen Baster.

“It was absolutely beautiful to watch wasn’t it?” he said.

“She jumped well, she put herself into the race and Stephen just rated her perfectly.

She was in a lovely rhythm throughout, he controlled the race. He just had her picking up the whole way and once she balanced up in the straight she was able to kick clear – very good ride.”

The man himself said the filly placed herself in an ideal position following a good jump.

“I watched the replays in Sydney, she’s been a little bit slow out but today she pinged the machines and travelled really nicely and pricked the ears and relaxed nicely for me.” Baster said.

Baster looked untouchable heading to the line but the jockey said he was concerned he might have pulled the trigger too early on the filly.

“I was worried I might have let her go a little bit early but she was fully stretched and still strong on the line so credit to the training effort from Gai and Adrian.”

Sort After – who Bott described as a ‘progressive filly’ – will more than likely run in the Group 2 Matriach Stakes on Saturday at Flemington according to the trainer.

“More than likely you will see her back up on Saturday.”

Sort After is $26 at Sportsbet.com.au to take out the Group 2 Matriach Stakes at Flemington on Saturday.