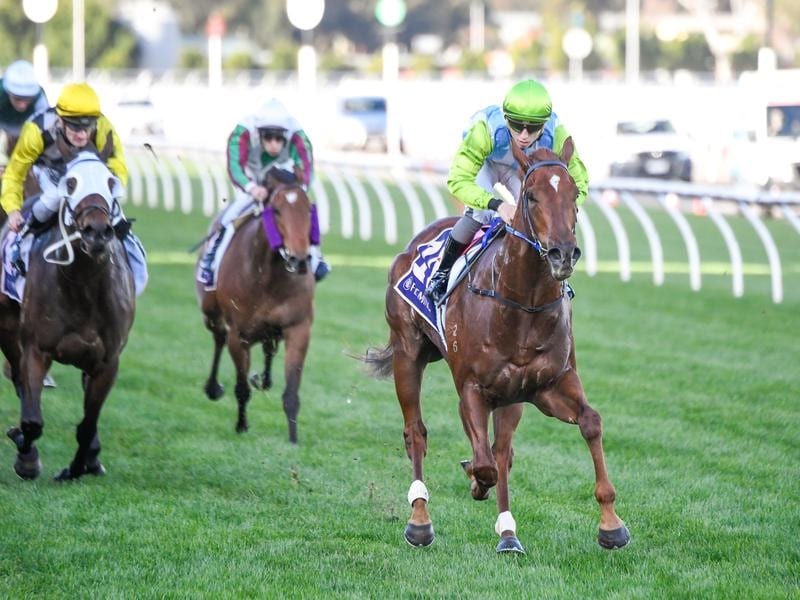 Front Page has made a one-act affair of the AR Creswick Stakes, a Listed race for three-year-olds.

Front Page has made the transition from country performer to stakes winner with an explosive metropolitan debut at Flemington.

After five starts around the border region of NSW and Victoria that had netted three victories, Front Page was brought to Melbourne for his city debut and collected the Listed AR Creswick Stakes.

Front Page went about his work in impressive style and followed the victories of subsequent Group One winners Nature Strip and Gytrash in the last two editions of the 1200m race.

Having scored first-up at Albury and following that with an easy win at Wangaratta at his latest start, trainer Geoff Duryea and the gelding’s owners wanted to test Front Page’s ability.

Front Page is the younger brother to the Duryea-trained News Girl, a three-time Caulfield winner and stakes placegetter at that track.

Part-owner Paul Duryea, representing his father Geoff, said Front Page would be spelled with a view to coming back for races in the spring.

He said Front Page and News Girl were different types with nothing bothering the younger galloper.

“She just jumps, runs, wins, whereas he doesn’t care about anything,” Duryea said.

“You could drop a bomb under him and he wouldn’t move and he just does whatever you want.

“We knew he had ability but he’s a long way behind her mentally, so we just wanted those couple of extra runs this time in the country just to let him switch on a bit before we came down.

“Obviously it was a big step up, but we thought if he races up to what he was showing us then we could run top three.

German is undefeated on Front Page and was associated with News Girls in her three wins at Caulfield.

He said there was still a lot that Front Page needs to learn, but noted he was heading in the right direction.

“He has a lot of confidence in himself which has got him to where he is now,” German said.

“Once the penny drops in a prep or two, I think he’ll be a very nice horse.”