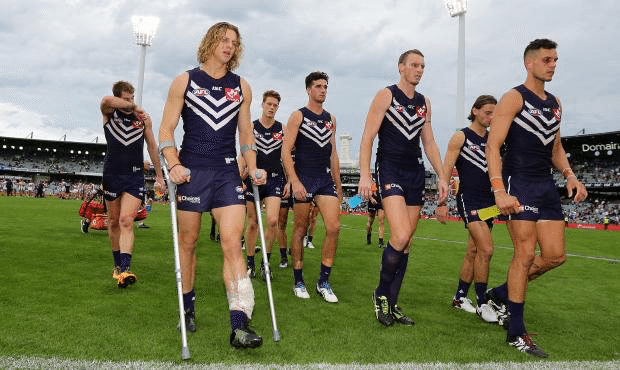 FREMANTLE is the big slider in the finals betting market following its shock loss to the previously-winless Carlton, drifting out to $15 to finish inside the final eight at Sportsbet.com.au.

The Dockers failed to secure their first win of the season in a match most predicted they would easily succeed in, going down to the Blues by four points at Domain Stadium.

The lack of confidence in the Dockers was further strengthened by the confirmation that 2015 Brownlow medallist Nat Fyfe will potentially miss the remainder of the season after re-injuring his surgically-repaired leg.

The star 24-year-old played just five minutes of the third quarter after leaving the field prior to half time, after a enduring a heavy hit to the leg he broke late last year.

X-rays after the match confirmed Ross Lyon’s worst fears in the aftermath of the narrow loss.

Fyfe is still optimistic that he will be able to return to the field late this season.

“Clearly I’ve broken my leg again. It’s the same leg I broke last time, just above the plates. So I’ll have surgery tomorrow and start the recovery process,” Fyfe said.

“I’ll know more details tonight after I see the surgeon but I’m really hopeful I can get back and play some footy this year.”

Fyfe started the round as one of only four players in single figure odds for the Brownlow, but now ambitious punters who think the 2015 winner can make a remarkable recovery can get a $1001 on the long-haired Docker.

Geelong’s Patrick Dangerfield is now the $5 outright favourite for the medal at WilliamHill.com.au.

The loss of Fyfe caps of a miserable month of football for Ross Lyon.

Last year’s minor premiers were considered one of the finals locks of this campaign, but after starting the season 0-5 they now face the very real prospect of a bottom four finish.

The Dockers are the only team who has failed to win a game this in 2016 and they currently sit on the third line of betting at Sportsbet.com.au at $8.00 to win the least amount of games this season.

Fremantle coach Ross Lyon believes it will take an enormous effort from top of bottom to dig them out of their current hole.

“(We are) are playing really poor football and aren’t winning games.” Lyon said.

“Unless you can arrest that and continue that trend it is just a horrible season isn’t it? I feel for our members and our fans and I feel for our players and our coaching staff because it is not what we wanted to produce, but clearly we are producing it.

“We are all hurting, but the difference between amateurs and professionals is that the amateurs don’t progress, the professionals are paid to progress.

TOM Lynch’s spectacular start to the 2016 season in front of goal has forced Sportsbet.com.au to move the young Sun into Coleman Medal favouritism at $3.75.

Lynch – who has kicked the most goals of the match in all five outings this season – is four goals clear of his nearest rival (Lance Franklin) on the AFL goals tally and will be hard to run down if his current form continues.

The gulf between Franklin and Lynch could have been closer if the dual-Coleman medallist was able to kick straight against the Eagles.

The former Hawk booted 2.5 in his side’s big win on Saturday, but still remains the joint favourite for the Coleman at $3.75.

The big drifter in the market is Eagle forward Josh Kenendy.

The reigning Coleman medallist started the season off in sensational fashion, booting eight goals against the Lions in round one, which saw him firm right in to $1.75 to go back-to-back.

A failure to kick a big bag has since seen the former Blue move out to the third line of betting at $6.

Despite missing the opening month of the season, Giant forward Jeremy Cameron’s five goal effort caught the eye of Sportsbet.com.au, moving the former All-Australian into an enticing $15.