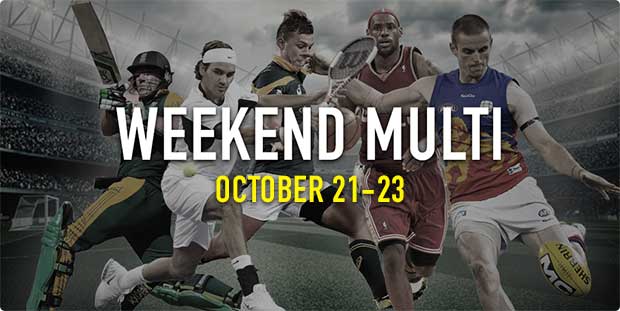 WHAT a time to be alive sports fans.

The Premier League and the A-League are in full swing, the NFL season is gaining momentum and the domestic cricket season is thrilling fans across the nation.

Oh, the most exciting two minutes of racing also takes place this weekend at Moonee Valley, in case you forgot about the Cox Plate.

There is plenty of value to be had across this weekend and we have put together a multi that we believe will net our loyal readers a tasty little return on their investment.

All odds for this weekend of sport were provided by Sportsbet.com.au.

Bersart Berisha to score at anytime against Adelaide United ($2.63)

It is one of the jewels in the Spring Racing Carnival crown in Melbourne and best described as the most exciting two minutes in sport – the Cox Plate and it kicks off our sporting multi this weekend.

The 2016 edition promises to be the most exciting one yet given the star power that is set to take to the track.

Superstars Winx and Hartnell are set to battle it out for the Cox Plate and both horses bring in stellar form into Moonee Valley.

It is impossible to split the pair in our opinion and given we are putting together a multi here we are happy to take the generous $1.35 odds on Hartnell to finish in the placings.

It might be the fiercest derby in the A-League but for us the battle between the Reds and the Victory comes down to just one man – Besart Berisha.

The Melbourne frontman has failed to find the back of the net in the A-League this campaign, but has been prolific in the FFA Cup, scoring in two of their three matches in that competition.

Adelaide has failed to keep a clean sheet this season and their defence at times has looked shaky, all the more reason to back Berisha to score this weekend.

We were staggered by the odds on offer for the Victory marksman and we recommend inserting the former golden boot winner into all your weekend multis if you are looking to get a healthy return.

Tip: Besart Berisha to score at anytime against Adelaide United – $2.63

The clash between Arsenal and Middlesbrough is the third leg of our weekend multi.

The Gunners are joint league leaders alongside Manchester City and host a Middlesbrough team that is tettering just above the relegation zone.

A win on the weekend would extend Arsenal’s win streak to seven straight games and eight matches without a loss, while a loss for the Boro would mean they remain winless across seven outings.

On paper it seems like a formality and we are backing the Gunners to keep their winning streak alive in the early Sunday morning hours.

Last game of our multi sees the Super Bowl favourite Patriots travelling to Pittsburgh to face the Steelers.

The Patriots have been sensational since the return of suspended quarterback Tom Brady. Brady’s return has also awoken the beast that is Rob Gronkowski, who scored his first touchdown of the season in last weekend’s win against the Bengals.

The Steelers were one of the early favourites to make it through to the conference finals but after confirmation that lynchpin quarterback Ben Roethlisberger will miss potentially the next six weeks after undergoing knee surgery, they have blown out in the market.

Pittsburgh is $5.50 to win the AFC Championship game at Sportsbet.com.au.

Without Big Ben the Steelers’ offense will have a hard time moving the ball. We are backing the Patriots to make it three wins in a row.

Multi insurance deals across this weekend of sport

Like the look of our multi this weekend? Why not head over to WilliamHill.com.au and utilise not only the money back special on a four or more legged parlay, but also take advantage of the tiered bonus system that is on offer.

Place a four or more legged multi this weekend on any sport and if you miss out by one leg you will get your stake back up to the value of $50.

If you win though, William Hill will give you bonus bets depending on the value of your multi and how many legs you have.

Winning bonuses are paid as bonus bets starting from 2.5% for a four legged multi up to a 40% bonus on parlays that contain 12 or more legs.