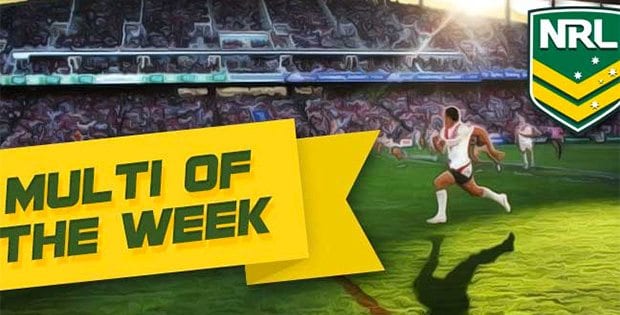 AFTER a long, hot summer the NRL finally kicks off in the first week of March and it’s not a moment too soon.

We’re at the point of the year where anything is possible – except the Knights winning the premiership.

The Storm come into the season looking to go one better after last year’s heartbreak, the Sharks will aim to back up their maiden title win, while the Rabbitohs and the Roosters are looking to bounce back after bitterly-disappointing campaigns last season.

It promises to be an intriguing season of rugby league action.

All odds for the first week of the NRL season competition were provided by Sportsbet.com.au.

Free tips for the Round 1 NRL Multi:

Gold Coast Titans to win against the Sydney Roosters ($2.20)

Two of last year’s finalists battle it out in the opening week of the NRL season as the Bulldogs host the Storm.

The Storm are looking to go one better after their grand final defeat at the hands of Cronulla. Melbourne will be hungry and motivated to hit the ground running in 2017.

The Bulldogs were erratic last season, and it’s hard to see where they have improved since then. Much will be left on the shoulders of powerhouse James Graham to lift his side.

We are anticipating another strong start to the season from the Storm. They should get past the Bulldogs to get our multi rolling.

One of the buzz teams of 2017 in the form of the Rabbitohs host the Tigers in a match up that should be a walk in the park for the green and red.

The Rabbits looked sensational across the pre-season. Their acquisition of Robbie Farah looks to be a masterstroke. He will be ready to fire against his former side.

The Tigers have had the off-season from hell after the Tim Simona scandal. They will be looking forward to putting it all behind them and getting out on the field.

We are backing South Sydney here. They have a far stronger team on paper and should crush the Tigers first up.

Two teams expecting to be competing for the NRL title meet on Saturday night as the Cowboys host the Raiders in Queensland.

The Cowboys take a full strength side into Saturday night, headlined by the inclusion of Dally M medallist Johnathan Thurston. If they can avoid injuries throughout the season they will be right in the mix at the end of the season.

The Raiders are the biggest mysteries going into the season. At their best they can compete for the title but if they are off even slightly they are prone to some inexplicable errors.

We are backing the home side here to win their opening game of the season.

The Titans and the Rosters round out the NRL opening round multi this weekend on the Gold Coast.

The Titans welcome in Kevin Proctor from the Storm and have arguably the best player in the league in the form of Jarryd Hayne. They will always be dangerous.

The Rosters are expecting to be much better this season after a lacklustre campaign. If the pre-season is any indication they will be much improved.

We are backing the Titans though. Hayne is the player who make the difference. While he is fit there is no stopping the Gold Coast.