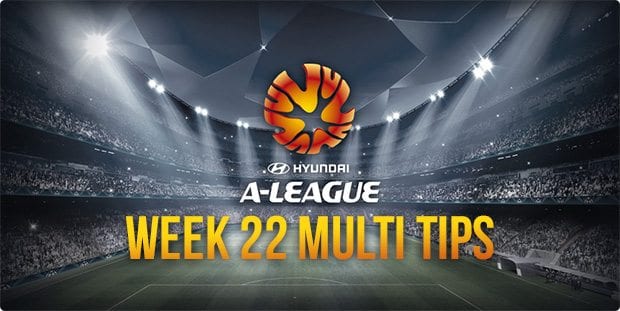 THIS weekend’s round of A-League action is headlined by one fixture, the Big Blue.

Just eight points separate the first-placed Sydney FC and the second-placed Melbourne Victory, which means the minor premiership race could become wide open if the big V can cause an upset on Friday night.

If the Victory can topple the Sky Blues on Friday night their $17 price at Sportsbet.com.au to win the minor premiership will shorten significantly.

There are still finals spots up for grabs as we come to the conclusion of the regular season, which means it is all to play for in the latter rounds.

All odds for the 22nd week of the A-League season were provided by Sportsbet.com.au.

Selections for Round 22 A-League multi:

Brisbane Roar to win against the Newcastle Jets ($2.30)

The top of the table, NSW vs Victoria Big Blue headlines the weekend of A-League on Friday night.

The Sky Blues are hunting their third straight win over the Victory, who have won their last two games against their Friday opposition 2-1.

Sydney to win 2-1 against the Melbourne Victory is paying $8 at Sportsbet.com.au.

The Victory are looking to win their third straight game after two strong performances, but beating Sydney at Allianz is a difficult prospect.

We are backing the Sky Blues to win the Big Blue and sew up the minor premiership.

The Wanderers host the Reds in the second leg of the A-League multi and on paper it is hard to see how the reigning premiers compete here.

Adelaide will collect the wooden spoon the season after winning their first ever A-League title. It is a horrible result for a proud club.

Conversely, the Wanderers have it all to play for. WSW are currently occupying sixth position, but are only two points clear of Newcastle.

The Wanderers need to win and they should do it easily here.

Melbourne City travels north to face the Central Coast Mariners in pivotal match for both sides.

The Mariners need to win or their finals dream will be over. They currently sit in second last position, but only four points adrift of the sixth placed Wanderers.

City is in fourth position on 30 points, and while their spot inside the top-six is far from assured it will all but be locked in if they can win on Sunday.

City are the far classier team of the two competitors and should sweep aside the Mariners to solidify their finals position.

An important match up that has finals implications rounds out the multi this weekend as the Jets host the Roar on Sunday afternoon.

Both teams have not won in a month and are in dire need of a win to make sure they are playing finals football in 2017.

The Jets have one problem that they need to address – finding the back of the net.

Newcastle has scored just one goal in their last three matches. If they are to make up the two points on the sixth placed Wanderers to push into the six.

We are backing the Roar though. They should win the match and consolidate their position in the six.