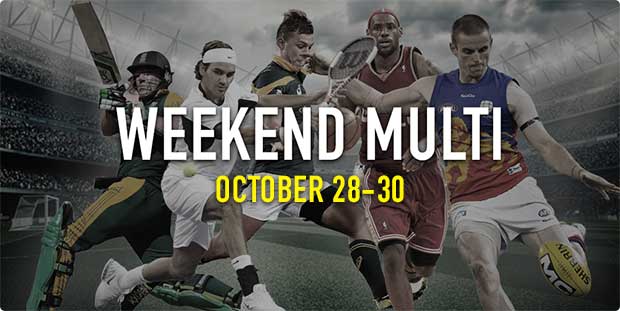 WHAT a weekend of events the sporting world has line up for you.

And where there’s sport, there’s a bet.

With the English Premier League, A-League, NFL, NBL and F1 all serving up some serious action on the weekend, let’s see if we can’t make it a multi and win you some cash.

Selections for the October 28-30 sporting multi of the week:

Formula 1: Daniel Ricciardo to finish on the podium at the Mexican Grand Prix at $2

IT’S a little bit hard yet to tell if Melbourne City are the real deal, or if they have just made their cross town rivals Melbourne Victory their whipping boys. City opened the A-League season with a win in Brisbane and then pummelled Melbourne Victory 4-1 in their first Melbourne Derby of the year – and Socceroos legend Tim Cahill’s debut. But they sandwiched a 2-0 win over the Victory in the FFA Cup with a 3-2 loss to the Perth Glory on the weekend – on their home deck. They will play at home again and welcome an Adelaide United side that is yet to win a game in three matches – taking its only point against the Newcastle Jets in round two. The Reds lost to the Victory, 2-1 at home and have some serious injury woes, with international stars Marcelo Carrusca and Sergio Cirio both on extended absences. City will be too strong at home.

Another soccer game, but this one is the big leagues, with equal top Arsenal taking on bottom feeder Sunderland. And by bottom feeder, we mean dead last, the Sunderland side yet to register a win in nine attempts. By contrast, the Gunners have only lost once this season and count six wins and a pair of draws on their ledger, although they did play out a boring scoreless draw with Middlesbrough on the weekend, before accounting for Reading in the League Cup, 2-0. The table positions are an indication of where these two teams stand and we reckon, even though it is at the Stadium of Light, the Gunners should be far too good for a Sunderland side looking destined for relegation.

Given the frequency of NBA games, it’s hard to get your LeBrons and your Currys in a multi that is made a couple of days out from the weekend. Fortunately, we have a little NBL to whet the whistle of our roundball punters. And how about a bottom of the table clash? Not normally the most exciting of match ups, the NBL has been so even this season, that every game has the potential to be fun. The Taipans are propping up the competition, having not won a game. Put simply, their roster is no good. By contrast, the Illawarra Hawks look like they should be contending for the title, not languishing in second bottom with just won win. Surely AJ Ogilvy and imports Marvelle Harris and Michael Holyfield can get the job done on their home floor?

Formula 1: Daniel Ricciardo to finish on the podium at the Mexican Grand Prix at $2

If Nick Kyrgios is our most well known sportsman for all the wrong reasons, then Daniel Ricciardo is a close second for all the right. What a stunning back end of the Formula One season the Aussie legend has had. Ricciardo could not buy a podium finish early on, standing on the dais just once in 10 attempts. Since then, he has been on the podium in six of eight races, including a win in Malaysia. Ricciardo’s good form continued in Texas on the weekend, the Aussie boy joined on the podium by King Leonides himself, Gerard Butler, the Law Abiding Citizen star partaking in his customary shoey that has become popular after each top three finish. We reckon he will be slamming another shoey in Mexico – let’s hope it is from the winner spot.

They say don’t bet on games involving divisional rivals, but we’re genuinely worried for the Chicago Bears in this one. Put simply, the Bears are no good. By contrast, the Vikings are very, very good. And they suffered their first loss of the season, their offensive line exposed by the Philadelphia Eagles in a 21-10 defeat, putting the first blemish on their pristine 5-1 record. The Bears have won just one game this season and were rolled again on the weekend, 26-10 by the Green Bay Packers. We can’t see the Vikings letting another one slip against a divisional rival whose season is already cooked.