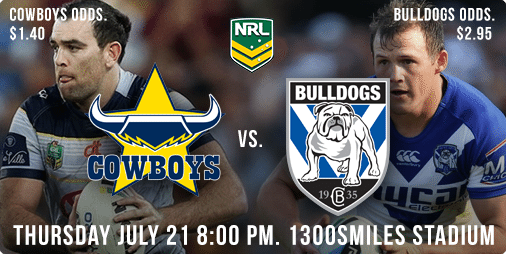 THURSDAY NRL is back and what a game we have in store.

The North Queensland Cowboys host the Canterbury Bulldogs in a top-four tussle that could have a significant impact on the finals.

The Bulldogs are one of the form teams at the moment with three wins coming in between two bye rounds. During that stretch they defeated only one top-eight team, but take nothing away from the quality of football the Dogs are playing.

They own the head-to-head advantage against the Cowboys with a 17-11 overall record, but the Queenslanders have their full arsenal back after State of Origin and a very handy track record at Townsville.

The Cowboys have won 29 of 34 games at 1300Smiles Stadium – a stat that ranks among the best home ground advantages in the NRL.

As expected, the bookmakers are favouring the Cowboys. With all the stars back in action this Thursday night, the try-scoring markets should appeal to punters.

Take a head-to-head bet with Sportsbet on North Queensland vs. Canterbury this Thursday and get a 50 percent bonus boost

The Cowboys enjoyed the bye week in round 19 and now welcome back the likes of Gavin Cooper, James Tamou, Johnathan Thurston and Matthew Scott – just to name a few.

Kyle Feldt won’t be playing on the wing due to injury, but noted try-scorer Javid Bowen comes into the squad to take his place.

Four Cowboys players have scored seven times this season – Justin O’Neill, Antonio Winterstein, Michael Morgan and Gavin Cooper – but we’re steering away from those four in this game.

The best way to beat the Bulldogs is by going around them and that plays into the hands of Kane Linnett. The centre has been disappointing in the try-scoring ranks this season, crossing for only three tries from 14 games, but he’s overdue and the $17 at Sportsbet is too good to pass up.

Bowen could also take advantage of some luck after he gets the nod to start with Feldt’s omission. The slick winger has scored three tries from only four games and he’s starting to get his confidence up. He’s currently $9 at Crownbet, which looks like a solid first try-scoring option.

Brett Morris has had limited opportunities this season, playing in only three games, but he’s made a significant impact.

The noted first try-scorer has already touched down on seven occasions and that’s the reason why he’s the current $10 favourite for the Bulldogs. He and his brother, Josh, are both top chances this Thursday night and, with 12 tries between them, they look like good bets.

Curtis Rona is paying surprisingly good money to score first. The Bulldogs centre does make way for Morris on the wing, but he has scored 10 tries this season and has a knack for finding the line. The $17 at CrownBet looks a nice price and $3 for anytime tryscorer is worth a gamble at Sportsbet.

Based on their home record and the players that return, we think the Cowboys will be too strong this Thursday night.

We respect the Bulldogs, but they will be better suited back in Sydney in the cooler conditions and winning at 1300Smiles Stadium is one of the hardest things to do in rugby league.

Look for Linnett and Morris to have big games, with the Cowboys ultimately coming out on top 24-12.