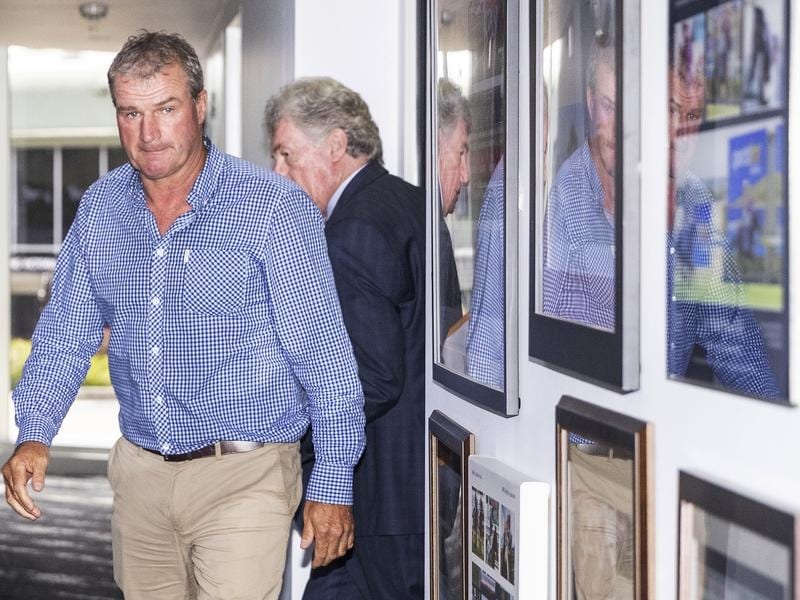 Horse trainer Darren Weir has been banned for four years over possession of electric-shock devices.

Darren Weir has been banned for four years for possession of electric-shock devices, completing a stunning and swift fall from grace for one of Australian racing’s most celebrated figures.

A Melbourne Cup-winning trainer, Weir didn’t contest Racing Victoria charges when he appeared before a hastily convened Racing Appeals and Disciplinary Board panel on Wednesday.

The hearing was told police and stewards found electrical apparatus known as jiggers in the master bedroom of Weir’s home when they raided his principal stables at Ballarat last week.

Weir faced six charges including three for possession of an electrical device along and one of conduct prejudicial to the image of racing which was found “proven”.

In handing down the ban, board chairman Judge John Bowman described the events of the past week as a sad chapter in Australian racing.

He said racing had moved on a long way with its animal welfare issues.

“Until a week ago, you could be described as a leviathan trainer with hundreds of horses, owners that number in the thousands with a staff of 150,” Bowman said.

“You rose from the depths of the Mallee (region) to be Australia’s leading trainer.

“All of this makes your fall even sadder.”

Judge Bowman earlier told the hearing he and fellow sitting board member Joshua Bornstein had previously had interests in horses trained by Weir.

He said neither he nor Bornstein had met the trainer.

Bowman said he had divested his interest in the horse when appointed RAD Board chairman while Bornstein’s wife had a share in a horse trained by Weir.

Weir trained a Commonwealth record number of winners last season from a stable that had been described as an industry juggernaut.

Most of his 36 Group One winners have come over the past five years as some of the world’s biggest and best-known owners flocked to his stable in search of success.

It was a 100/1 chance that put him on the international map when Prince Of Penzance, ridden by Michelle Payne, won the 2015 Melbourne Cup.

Counsel for RV Jeff Gleeson said the fact the devices were found at the trainer’s home indicated a desire to hide them from a stewards’ inspection.

He said there was no lack of knowledge coming from Weir about the devices which could infer that having them in his possession was a risk he was prepared to take.

Gleeson said the penalty RV stewards were seeking was appropriate, taking into consideration how much the racing industry had been tarnished over the past week.

Asked if a financial penalty would be considered, Gleeson said the “imposition of a disqualification was more appropriate”.

“The four-year disqualification is appropriate if the board takes into context how much the racing industry has been tarnished in the past week,” Gleeson said.

Weir’s counsel Patrick Wheelahan said the trainer did not agree with RV’s submissions but wanted a quick end to the inquiry.

“He instructed his lawyer to get the matter finalised as soon as possible,” Wheelahan said.

“He’s seen other matters drag on costing millions of dollars to the industry.

“In the best interests of racing he wants an early resolution so racing can move on.”