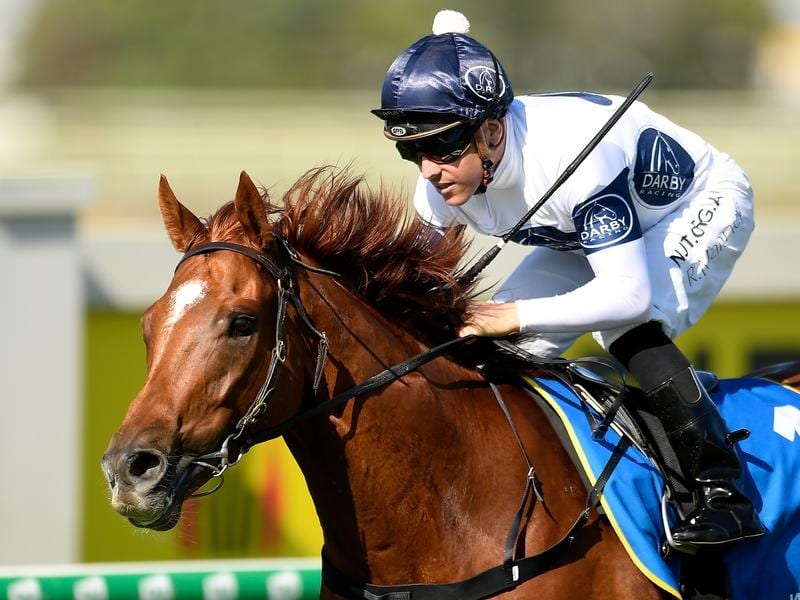 Constant Flight rises in class in the Lough Neagh at Eagle Farm but his trainer thinks he can cope.

Trainer David Vandyke realises the promising Constant Flight faces a sharp rise in class at Eagle Farm but he believes the gelding is up to it.

Constant Flight will step up from a one metropolitan win race to the Listed Lough Neagh Stakes (1300m) on Saturday.

Vandyke has been having a great season and won a black-type race with Frangipani Moon in the Listed Just Now Quality last Saturday.

One of the stars has been Constant Flight who took his record to seven wins from 13 starts at Doomben two weeks ago.

Vandyke said he had no hesitation stepping Constant Flight up in class.

“It is obviously going to be tougher but he ran a class record in his last win under 58.5kg,” Vandyke said.

“I have had an opinion of this horse right from the start. If he goes well on Saturday we can start looking at the Magic Millions Cup.”

Trainer Desleigh Forster said she expected Chapter and Verse to get back in the field again from a wide barrier and then finish hard.

“There looks to be a lot of pace on Saturday. It is an advantage being back at Eagle Farm as he likes the track,” she said.

“He is a bigger and stronger horse since he won the Magic Millions QTIS race in January.”

“It gives me more than few options with him. I suppose the debate is whether we head to the Millions QTIS race again or if I send him into the Magic Millions Cup.”

Forster said if she decided to go to the QTIS race she would would probably not give Chapter and Verse another start after Saturday.

“But if he is going to the Magic Millions Cup he will need another start or perhaps a trial,” she said.

“It will all come down to how he goes on Saturday.”

Vandyke has the favourite for the Listed Gold Edition Plate with Alligator Blood who has drawn barrier five in a field of 10.

“He is a horse who can do it at both ends. I have been pleased with him,” Vandyke said.

Alligator Blood will be having his first run since finishing second to Super Seth in the Group One Caulfield Guineas on October 12.