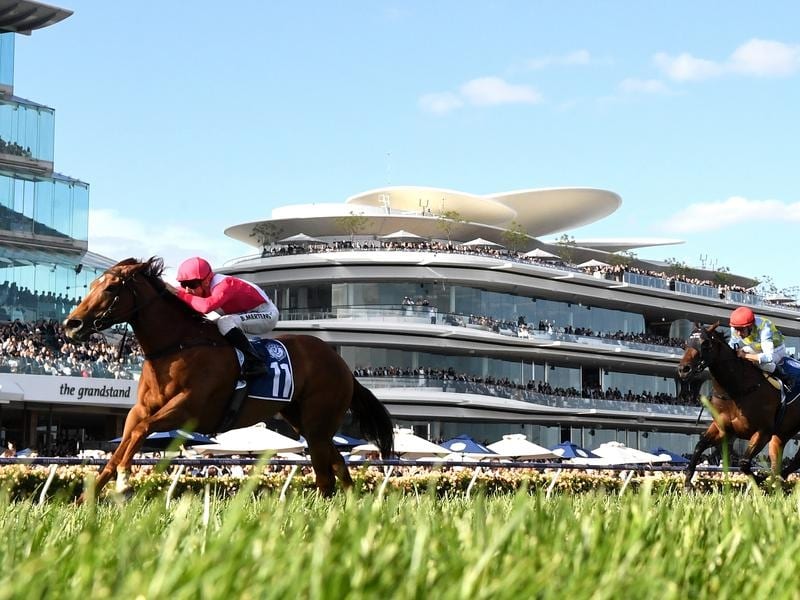 Divine Quality (l) will return to her comfort zone on the straight course at Flemington.

Trainer Robbie Griffiths is hoping a return to the straight track at Flemington will bring out the best in Divine Quality.

After she failed at her last start in the Group One Sangster Stakes at Morphettville, Griffiths elected to skip The Goodwood with Divine Quality to concentrate on Saturday’s Listed Straight Six (1200m).

Griffiths said Divine Quality pulled up sore in her off-side front foot when last in the Sangster Stakes on May 4.

“She got her head on the side and didn’t come around the corner so I think that was the problem because her sectionals were good,” Griffiths said.

“From the barrier to the 600 metres she was good and from the 300 up the straight she was good, but around the corner she went nowhere.

“She went from tracking Spright to being five lengths off her.

“She didn’t lose ground in the straight, she lost it around the corner and Beau Mertens said she didn’t feel right.”

With no turns to contend with on Saturday, Griffiths is hoping Divine Quality will run to her best.

“With a bit of luck she’ll get back to Flemington on a straight track and she could turn her form around,” Griffiths said.

Griffiths also bypassed The Goodwood with Halvorsen because of a minor injury.

Halvorsen won the VOBIS Gold Dash at Caulfield last month and was set to be a lightweight chance in Saturday’s Goodwood.

Now Griffiths has switched his attention to the A R Creswick Series Final for three-year-olds at Flemington on July 6.

“He sprained a hind fetlock joint. He must have kicked out and done something stupid,” Griffiths said.

“He’ll more than likely go to a race at Flemington on June 8 and then we’ll try and re-peak him for the final of the Creswick Stakes.”