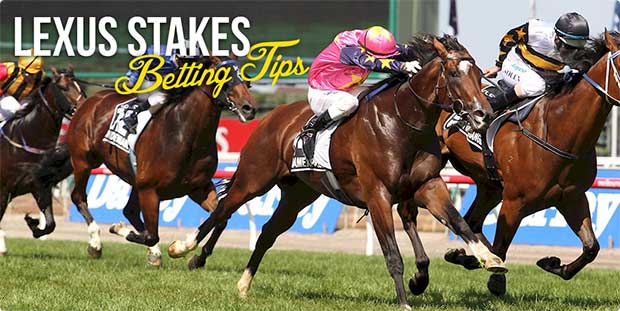 THE Group 3 Lexus Stakes has seen eight winners go on to win the Melbourne Cup three days later – this year a field of 12 hope to become number 9.

In more recent times the likes of Shocking and Brew have completed the double and there are some runners which will be looking to secure their place in the Melbourne Cup on November 1.

There are two international horses in the field with Pentathlon lining up for John Wheeler and Geelong Cup place-getter Oceanographer getting another run in Australia for Charlie Appleby.

The strong field also includes Real Love which finished fifth in the Caulfield Cup and Tom Melbourne which has been knocking on the door of a major win this spring carnival.

The Chris Waller-trained nine-year-old scored an overdue win in the City Tattersalls Cup last start and although this might be a stretch too far at this stage of its career, it could upset them at big odds.

Its run for sixth in the Group 1 Metroplitan was a good indication of its ability at the staying distances and it shouldn’t be discounted here with Hugh Bowman in the saddle.

Its run for fifth in the Caulfield Cup was better than it appears on paper. Jockey Craig Williams didn’t give it much hope as it raced wide in the early parts and was forced to do work throughout the run, but Rawiller takes over now and that will help its chances.

Darren Weir is training very well at the moment and there’s no reason it can’t show the form which had it winning the JRA Cup two starts back where it defeated Maurus by three lengths. That is strong form for this and its record of two starts for one win and one placing at Flemington is a positive.

Tally has shown glimpses of form this campaign with a third placing in the Group 1 Turnbull Stakes behind Hartnell, but it was very average in the Caulfield Cup and we’re not sure that we can forgive that effort.

It was good enough to run third in the ATC Derby at Randwick in April during The Championships which would otherwise be good enough form to consider here, but it’s too inconsistent to back confidently and the $11 is a little short for our liking.

Good form at Flemington in two starts and that will attract some punters at the odds.

John Wheeler knows how to train a stayer and the five-year-old from New Zealand showed plenty of heart when running third in the Moonee Valley Cup behind Grand Marshal last Saturday.

The son of Pentire is bred to handle the staying distances and it is twice a winner at the distance, but our concern is its lack of winning form. It hasn’t won for awhile now and last Saturday was the only form it had shown since running fourth in the Auckland Cup.

Would love to see it run over the extreme distances in Europe, but this could even be too short for it.

Punters are sticking with Tom Melbourne after four win-less runs this campaign, but it showed positive signs last time out.

The lightly-tried six-year-old finished second in the Coongy Stakes at Caulfield behind Vanbrugh which was a much better effort than it had been showing at its previous two starts.

The rise up to 2500m is an interesting point of interest for punters as it will likely need a slow pace to show its best. It likes to set the pace up front, but it has a tendency to over-race which would all but put an end to its chances in this.

Wouldn’t want to take anything less than $4.40 at William Hill, but it should drift in the betting.

The seven-year-old is bred to stay by High Chaparral, but that’s where the positives end.

It finished last at Moonee Valley in a handicap race on October 21 and that form isn’t going to cut it against the quality opposition it faces here.

Its form prior included a 12th in the JRA Plate and a 10th at Port Marquarie, so its best to leave this runner alone at the big odds.

The six-year-old by Encosta de Lago is a seven-time winner from 37 starts, but punters are taking the $7.50 on hope more than anything.

It’s a capable type at this distance and it was running on well in the Caulfield Cup, but it still finished 7.35 lengths behind Jameka and it hasn’t got close since resuming from a spell in August.

It opened at $8 and has dropped a half-point to $7.50, which means there is plenty of support for the gelding.

Chad Schofield comes back from Hong Kong to ride which is a positive and it might pay to follow any further market movement, but we can’t suggest backing it at that price.

The European raider produced a good run in the Geelong Cup and although it wasn’t a strong Cup field, it did work home well for third.

The son of Sea The Stars has been well backed to win the Melbourne Cup and following a good run in the Lexus Stakes, it will likely take its place in the field next Tuesday.

It has won three from 10 starts with its latest win coming in July at Doncaster. The extra 100m here will increase its chances of winning and punters are supremely confident of its chances.

Oceanographer opened up at $4 and that price has been smashed into $2.90 at Sportsbet. We still have reservations on the European runners this year, but follow the money with this runner.

Black Tomahawk has been a model of consistency this preparation and this will be its fourth run over 2500m in five starts.

The Weir-trained gelding has placed in five of six attempts at the 2500m which brings it into calculations at big odds in this. It does find it hard to win a race, but it will see out the distance and Craig Williams rides at 54kg.

$4.40 at CrownBet for the place looks the best betting option and we’d be surprised if it didn’t run in the top five or six.

The seven-year-old by Thorn Park battled away gamely behind Vanbrugh last start and the New Zealand import has room for improvement.

It finished second in the Auckland Cup in March before coming to Australia where it has gradually increased in distance. Its best run came over 2000m last start and the rise up to 2500m should suit it down to the ground.

It probably deserves to be at $67, but it’s not the worst chance in the field and a top three effort wouldn’t be a shock with some luck in running.

The Bandit finished second in the Ramsden at Flemington in May, but punters have been asking questions since that effort.

The imported five-year-old finished last in the Harry White Stakes at Caulfield when it ran 13 lengths behind Almandin and it showed no turn-of-foot when sixth in the Moonee Valley Cup last Saturday.

Not going well enough to recommend.

Finished third in the Moe Cup last start, but it has little form to recommend at this level and it hasn’t won or placed in six starts at Flemington.

The odds represent its chances of winning.