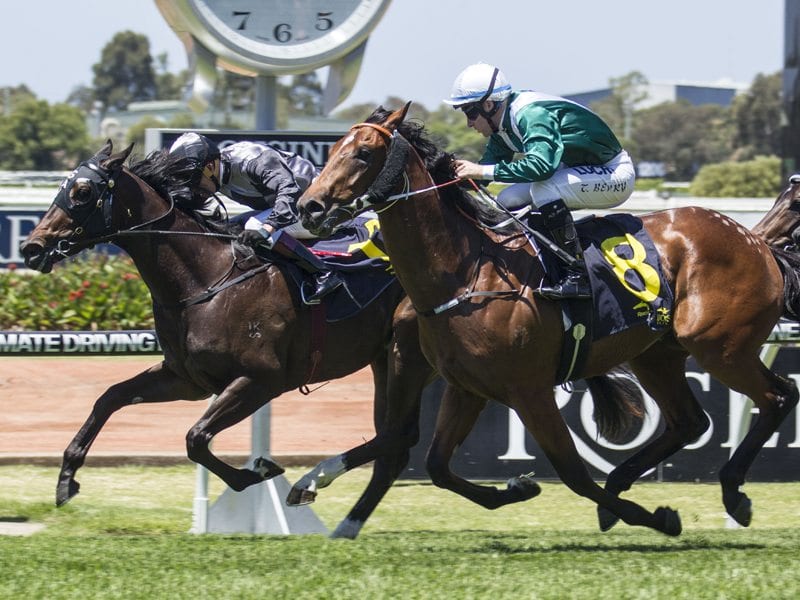 Serena Bay (L) has shown the benefit of previous experience to make it two wins from two starts.

Race experience counts for a lot when it comes to two-year-olds and it seems a winning counts for even more with Serena Bay refusing to be beaten at Rosehill.

One of only three raced youngsters among the nine starters in Saturday’s Golden Gift (1100m) and the only winner among them, Serena Bay ($3.40) led all the way and toughed it out to beat Reflectivity ($19) by a nose.

The runner-up showed his newness by giving his rider Tommy Berry a hard time, particularly late in the race.

Trained by Gai Waterhouse and Adrian Bott, Serena Bay won over 900m at Kembla Grange on debut and the stable now has its sights on next month’s sales-restricted Inglis Nursery (1000m).

“She was out on her feet but she’s very tough,” Bott said.

“She knew where the line was and that race experience helped.

“Anything that is up and running at this time of year stamps themselves and he just wants to jump and run.”

Her jockey Kerrin McEvoy admitted he was concerned the filly would not hold on.

“She does skip away quickly and get going and I was worried the last three hops,” he said.

“But she is tough and will only get better.”

Race favourite Florid ($2.30) looked as if he would be in the finish but ended up 1-3/4 lengths fourth with Ipso Facto denying him the minor placing.

Berry said the the runner-up would benefit greatly from his raceday experience.

“We had a beautiful run from the barrier but I couldn’t really get at him that much in the last 50 metres because he was boring in on top of Blake Spriggs (Ipso Facto),” Berry said.

“I just had go easy to try and keep him out.”

Florid’s rider Brenton Avdulla said the Godolphin colt also had more to give.

“I thought he was the winner on the corner but he just floated,” he said.

“This was nowhere near the bottom of him.”

The 2015 Inglis Nursery was the race to kick start the career of Extreme Choice, now the winner of two Group One races.