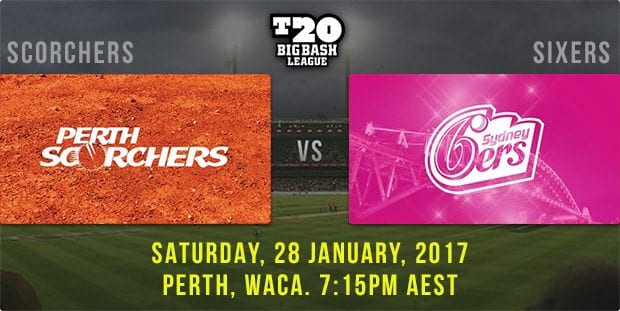 IT all comes down to this.

The Big Bash League final between the top of the table Perth Scorchers and dogged Sydney Sixers.

The Scorchers easily disposed of the Melbourne Stars in their semi final earlier this week, while the Sixers took a super over to get past the Brisbane Heat in a thrilling match.

It leaves the Scorchers as the obvious favourites with WilliamHill.com.au quoting the Big Bash’s most consistently-dominant team at $1.80, with the Sixers at even money in the decider.

In a competition that is so tight, the Sixers could have missed the finals all together, had they lost to the Stars, but that did not happen and they find themselves in third spot – but equal with the Scorchers on five wins for the season.

That means first to third was only separated by net run rate in one of the closest Big Bash competitions in years.

In this preview we will take a look at the man of the match candidates and who we think will be the match winners.

We like a couple of batsmen a bowler and an all rounder as prospective men who could cause serious damage for their respective teams and hopefully lead them to Big Bash League glory in the decider.

Man of the match predictions

It’s not often Klinger gets stuck in a rut. He hasn’t had the greatest season of his career, but he is still seventh on the list of top run scorers with 263 on the year. He failed in the semi final against the Stars and will be hoping not to make the same mistake again in the decider. The second highest run scorer in Big Bash competition history has the added carrot of chasing down the Melbourne Renegades Aaron Finch, just in case he needed more motivation than a grand final premiership. Finch has clubbed 1561 runs, which means Klinger – himself a former Victorian – needs 25 runs to surpass him and go into outright first on the table. Of course Finch has done it in 10 less innings before the grand final, but we won’t hold that against Perth’s most consistent run scorer. He’s produced on the big stage many times before, is stiff not to have played a permanent role in at the very least Australia’s T20 set up, and we are backing him in to bounce back from a poor semi and get the Scorchers off to a flyer.

Aren’t the Scorchers glad Johnson retired from the international stuff? Unlike Klinger, he is one bloke who has had a decorated career at the highest level, scaring the pants of some of the best batsmen in the world for a long period of time. Fit, care free and fast as all hell, Johnson wreaked havoc on the Melbourne Stars’ top order, claiming a wicket with the first ball of the match and going on to pick up 3/3 off his four overs. He was simply unplayable in the record breaking effort, conceding less runs off of a four over spell than any other player in Big Bash League history and shooting up to fourth in the Big Bash League wicket taking standings in the process. The former Australian bowler is still among the most frightening men with the pill in his hand and, if he can even come close to emulating what he did against the Stars, he will have one hand on the man of the match trophy against the Sixers.

Surely this bloke is part of cricket Australia’s future plans in the shortest form of the game? Adept with both bat and ball, Abbott can swing a match in an instant. He snared a remarkable 4/40 in the semi final against the Brisbane Heat to shoot to the top of the Big Bash League standings with 20 wickets on the season – five more than the Heat’s Mark Steketee. His 20 wickets have come from the past eight matches, after he went wicketless against the Thunder in the season opener and, while he can be expensive at times, he has also made some supreme contributions with the bat, including a match winning unbeaten 33 against the Melbourne Stars in the final game of the season that sewed up the Sixers’ finals spot.

Henrique burst out of the blocks in the opening game of the Big Bash, thrashing an unbeaten 76 not out to give the Sixers victory over the Sydney Thunder in the Sydney Smash. And then he largely went missing, dismissed for 30 or less in each of his ensuing innings, hampered by injury and a lack of fitness that ate into his ability to dominate games. That was until his match winning 64 against the Heat in the semi final. It is clear that this guy is a big game player at the domestic level and his ability to produce under pressure will be tested by the Scorchers. But we reckon he is up to the task and it would not surprise if he was able to put together a second match winning knock in a row. One thing we don’t want to see is a duck, like he produced in his very next innings after his 76 not out in the opener. Back him in.