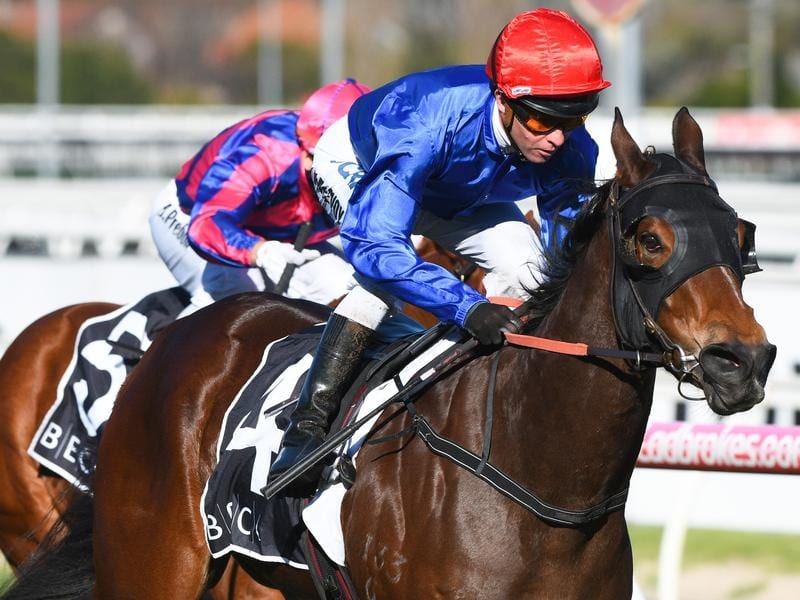 Magic Millions winner Exhilarates has returned to racing in peak form to win the Quezette Stakes.

Exhilarates has completed a feature three-year-old double at Caulfield for Godolphin after unleashing a powerful finish to record a first-up victory.

A race after her James Cummings-trained stablemate Bivouac blitzed his rivals in the Vain Stakes, Exhilarates was equally impressive in winning Saturday’s Group Three Quezette Stakes.

Having her first start since the Golden Slipper at Rosehill in March, Exhilarates ($7) was explosive under Kerrin McEvoy racing to a 1-1/2 length victory over Absolute Flirt ($8).

McEvoy has ridden Exhilarates in eight of her nine starts, combining with her to win the Magic Millions 2YO Classic on the Gold Coast in January.

He described the daughter of Snitzel as a serious galloper.

“She showed good quality at two and it’s always pleasing to see them come back and do it at three,” McEvoy said.

“She’s a racehorse, that’s what she is.”

McEvoy said after some early scrimmaging he was able to get Exhilarates into a nice rhythm where she was able to unwind a powerful finish.

“The race was put on a little tempo-wise and we were able to produce a nice finish and she looks like having a good spring ahead of her,” McEvoy said.

“After winning the Magic Millions she had a brief let-up and raced right the way through,” Keogh said.

“She made hard work of it today as she gets back in the field and she was wide, but it was a good effort.”