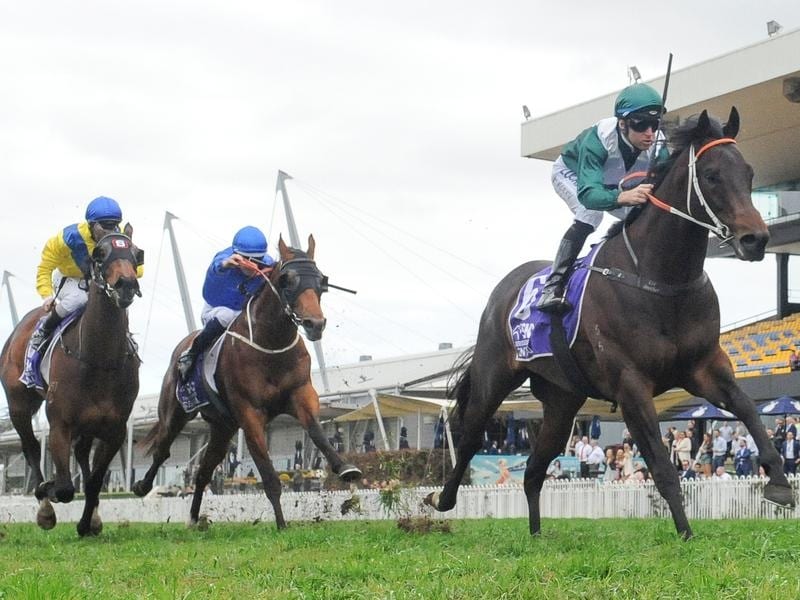 Exceedance has made a brilliant return to racing with an easy win in the San Domenico Stakes.

A week after riding the filly staking her claim as Sydney’s best, Tommy Berry has claimed a feature win on a colt making his own name.

The Hawkes Racing-trained Exceedance lived up to the hype to win Saturday’s Group Three San Domenico Stakes at Rosehill.

Godolphin’s Bivouac was the $1.35 favourite for the San Domenico (1000m) but in the end proved no match for the brilliance of Exceedance ($4.80) who had two lengths to spare on the heavy track.

“It was a bit like Libertini last week. We had to see him come back and do it but do it he did.

“He just wants to please you. He’s a lovely ride for a colt and has a great attitude.”

Berry said the colt would also hold his own if he should happen to secure a spot in the $14 million Everest (1200m) on October 19.

For co-trainer Michael Hawkes, talk of the Everest is premature with the team conscious of getting Exceedance up and running with some concerns about the heavy track.

“He really had to run today,” Hawkes said.

“If we took him out then it might be wet again in three weeks so we decided to run and he made it look easy.

“I told Tommy to ride him like the best horse and he did.”

Scratchings reduced the field to five with fifth-placed Royal Popcorn more than doubling his prize money with his $5000 collect.

Trainer Mike Cattell was criticised for putting the country maiden three-year-old in the race but he believed he could run well on wet ground.

Cattell also spoke to stewards to explain his decision and they allowed the $101 chance to run.

He finished 13 lengths from the winner after failing to get to the front as planned.

“We are super proud. We didn’t expect him to give a fight like that against these quality horses,” Cattell said.

“We got beaten probably a quarter of the distance most thought and we know we’ve got something in the horse. The autumn has been what we’ve planned for.

Kathy O’Hara rode Royal Popcorn and agreed there was something there.

He went much better than I thought he would,” she said.

Cattell also made a point of going to the stewards room after the race to thank chief stipe Marc Van Gestel for allowing him to run the horse.