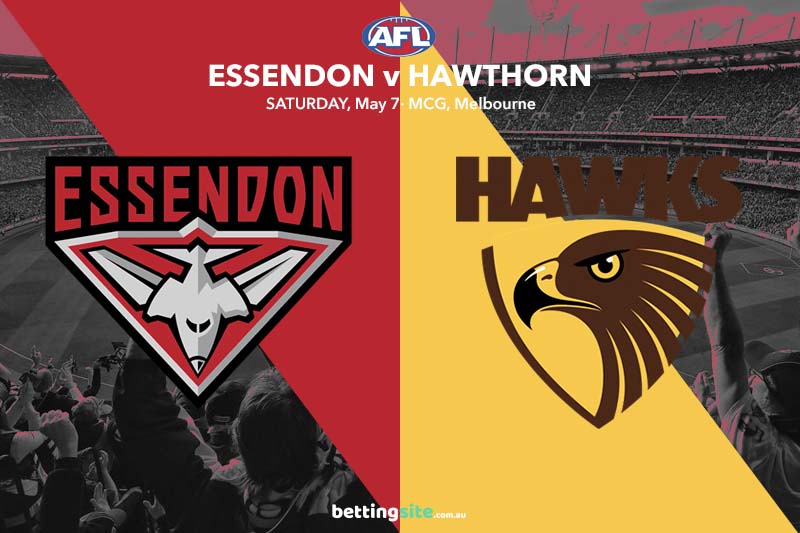 Can Essendon turn its poor start to the AFL season around when it hosts Hawthorn at Marvel Stadium on Saturday night ?

One of the big surprises to come out of the first seven weeks of the season was the blistering start the Hawks got off to despite a big turnover in player and coaching staff.

Sam Mitchell started his coaching career with three wins in the opening five rounds, which included impressive victories over Port Adelaide and Geelong.

On the other hand, the Bombers have been very disappointing so far this season, winning just one match in seven weeks despite finishing inside the top eight with a young squad 12 months ago.

The Bombers’ poor form has stemmed from a variety of areas, but the inability to field a consistent side is one factor that has done them the most damage.

Ben Rutten has been forced to dig deep into the team’s depth, with star forward Jake Stringer missing out again with yet another injury.

Three players have been rested for the Hawks including veteran midfielder Liam Shiels, while top draft picks Denver Granger-Barras and Josh Ward make their return.

One player who is bang-for-buck when it comes to disposals is Jack Gunston, as the experienced forward does not need much of the footy to tear a match apart. Gunston has been very influential this season but could have been more accurate in front of the goals last weekend after kicking three behinds.

Jordan Ridley will most likely head over to Gunston at the start of the match, but this will be an interesting matchup for the Hawks as well. Ridley is an elite kick in the back half and often repels the Bombers out of danger in defence, meaning he needs to be attended at all times. Ridley may get loose for the Dons and do some damage this weekend on his older opponent.

Considering the Hawks only lost to the reigning premiers by 10 points last weekend, they should have the power to get over the Bombers this Saturday. Brownlow Medallist Tom Mitchell and Jai Newcombe are pairing very well together in the middle, while Chad Wingard should star in his 200th AFL contest. We simply do not trust the Bombers to get anything done in their current state.

If you have seen a Hawthorn game this season, then you could understand how incredible Dylan Moore has been so far. Moore is a first-quarter specialist, having kicked a goal in the opening term in almost all of his recent matches. The small forward is very sound defensively with his pressure and often gets rewarded for his hard work with an easy goal out the back. Lock him in for a pair against the undisciplined Bombers. He is paying around the $2 quote with online bookmakers.

Although Jordan Ridley will star off the half-back for the Bombers, the Hawks are going to take home the chocolates on this occasion. Dylan Moore is a livewire up forward who should be good for a couple of majors. The best way to place same game multis is via the top betting apps that are available to Australians.