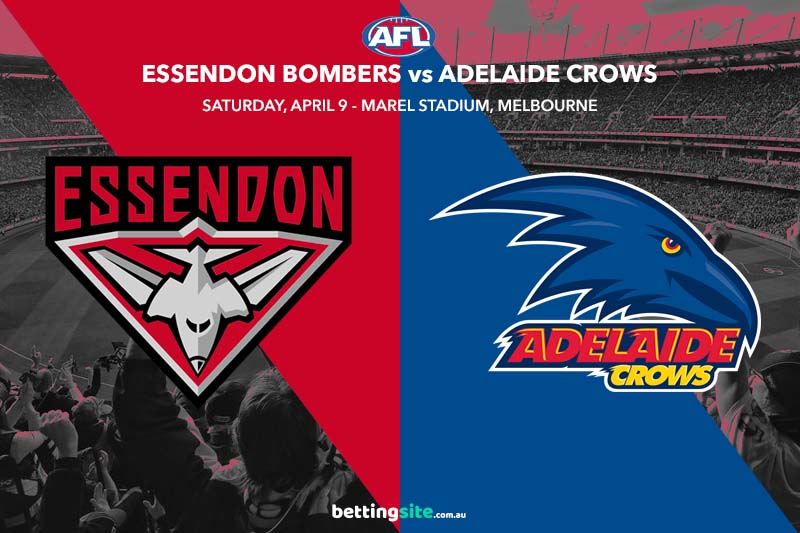 Can the Essendon Bombers record their first win of the 2022 AFL season at Marvel Stadium this Sunday, or will the Adelaide Crows be too strong and pinch another upset?

The Adelaide Crows finished round three in thrilling fashion after coming back from a late deficit to steal a miraculous victory, as Jordan Dawson kicked a goal after the siren to secure the four points.

2022 has been a very poor year of footy for the Dons to date, as they sit at the bottom of the ladder after losing all three of their opening matches while only averaging 72 points per game.

Experienced duo Rory Sloane and Taylor Walker will return for the Crows this week, giving them a huge boost both in the midfield and inside 50.

Will Snelling is one player the Essendon Bombers should bring back this week to add some potency to their front half, as the classy forward is very good at getting his teammates involved and kicking a goal himself.

One player who needs to stand up for the Bombers is Jake Stringer, who at his best is a goalkicking machine that can run through the midfield and get an important clearance. Stringer kicked 41 goals in 19 games last season and has already kicked three so far this year.

With a few Essendon midfielders sidelined through injury, Darcy Parish has become their main man in the middle. Parish broke out in 2021 with a sensational season, but so did Jordan Dawson at the Sydney Swans. Dawson capped off his brilliant game last week with a game-winning goal, but it was his ball-winning ability we really liked.

Both these players have the capacity to rack up plenty of disposals through the midfield at maximum impact, but the better value can be found with Dawson. The former Swan got going in round two and finished with 28 touches, a great total for the skilful left-footer.

Essendon Bombers to win by 24.5+
We expect the Bombers will respond this week after three poor outings, as they still have aspirations to play finals later in the year. There are still more than enough talented players on the Dons’ list to justify a big win this Sunday, while the Crows are filled with young, developing prospects. Peter Wright will also be very hard to stop inside 50 and in the ruck.

Jordan Dawson to get 25+ disposals
Dawson was ready to explode for the Crows this season after moving from the Swans, and after watching him dominate last week and win the Crows the match, we think he will start to consistently play top-level footy. His ability to accumulate handball-receives and thrust his team forward with purpose is impressive, while his marking around the ground is also elite.

The Bombers will get their first win of the season this Sunday afternoon off the back of a big performance from Jake Stringer in front of the goals, while Jordan Dawson will star for the Crows through the midfield.