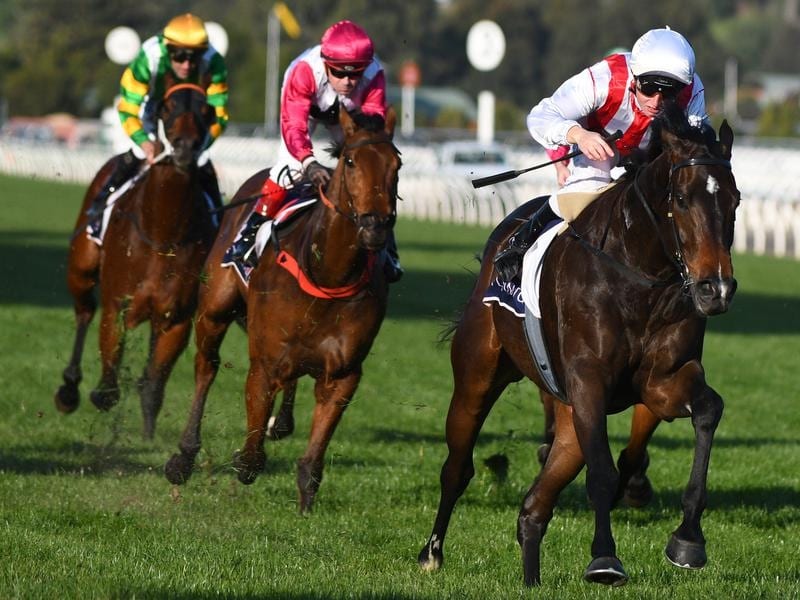 Zoutori will be one of two Oakleigh Plate runners for trainers Mat Ellerton and Simon Zahra.

Co-trainers Mathew Ellerton and Simon Zahra are no strangers to Oakleigh Plate success and have two runners as they bid for a second-straight victory in the Group One sprint at Caulfield.

Ellerton and Zahra won the Oakleigh Plate with Booker a year ago and the training partnership has Zoutori and Crystal Dreamer in Saturday’s edition of the 1100m handicap.

Ellerton also trained Miss Kournikova (2001) and River Dove (2003) to Oakleigh Plate wins, with Zahra part of the business for the second of those while he worked for John Hawkes when Sports won in 2000.

“Response probably should have won it (2011) as well so it’s always been a race we like to target a bit if we’ve got the right horse,” Zahra said.

Zoutori and Crystal Dreamer, $19 and $41 respectively, are going in fresh and Zahra said they were different styles of horses.

“Crystal Dreamer is an on-speed sort of horse, goes 100 miles an hour and that’s the way you’ve got to ride him,” Zahra said.

“He loves Caulfield. His form there has been enormous.

“He’s had a nice freshen-up so he’s going in there quite fit and well.

“The other bloke, Zoutori, gets back a bit and whether they are a bit nippy for him with that little bit of extra weight, time will tell.

“His main target is the Newmarket and we’ll see if he can hit the line strongly.

“Obviously he’s got great ability. Whether he’s an 1100-metre horse is probably the question mark. We’ve got to kick him off somewhere but he’s in good order.”

Seven-year-old gelding Crystal Dreamer, to be ridden by Damian Lane, has never been tried at Group One level but Zahra believes of the two, he is probably the better suited to the race.

Crystal Dreamer’s four wins at Caulfield from 13 attempts include the Group Three The Heath first-up last spring, when he beat Gytrash and Ball Of Muscle.

“His form is quite good and he’s not an easy horse to get past,” Zahra said.

Zoutori, to be ridden by Jamie Kah, won the Group Two Bobbie Lewis Quality first-up last campaign over 1200m at Flemington and was a close third behind Sunlight and Santa Ana Lane in the Gilgai Stakes.