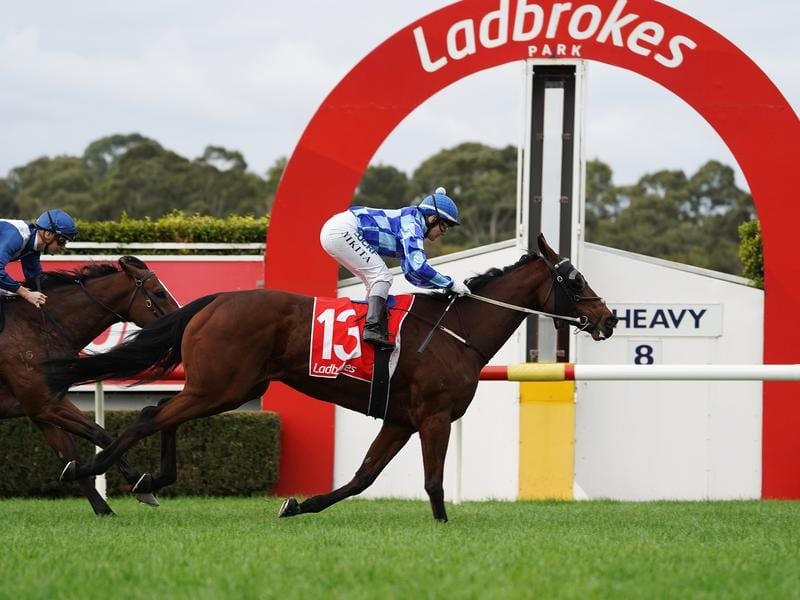 El Questro has returned to racing in winning form with a Sandown victory for trainer Alison Sheehan.

Delighted with the first-up success of El Questro at Sandown, Cranbourne trainer Alison Sheehan got some extra satisfaction seeing the colours of ex-trainer Rob McGuinness carried to victory.

McGuinness was a popular trainer at Caulfield during the 1980s and 1990s before retiring in 2004 and nowadays races a few horses in partnership with Sheehan, including Wednesday’s winner of the Le Pine Funerals Handicap.

Sheehan said it’s great to have someone with McGuinness’ experience to bounce ideas off.

“I’ve known Rob for as long as I’ve been in racing,” Sheehan said.

“I used to pre-train for him when he was at Caulfield before he spent a short period with Lloyd Williams and then I took over training some of the horses.

“Rob trained the grand-dam and the great grand-dam of this horse and I trained the dam, so it’s fitting as this is the last horse that’s racing in Rob’s colours.

“I’ve raced five of the family and some of the others have been city winners as well, so it’s really nice.”

El Questro registered a long overdue win on Wednesday having had a luckless preparation last campaign.

“It was a big ask today on a heavy track first-up, but she’d had a couple of nice trials going into the race and I was pleased where she was at,” Sheehan said.

Another trainer who celebrated a win with offspring from horses they formerly trained was Jim Conlan who prepared Pinyin to win the Blue Star Print Handicap.

Pinyin is a grand-daughter of Miss Pennymoney, a sprinter Conlan trained to two Group One victories including the 2000 Newmarket Handicap.

Nowadays, Conlan has only two horses in work and the other, German import Beau Balmain, made his Australian debut last Saturday and finished third at Caulfield.

“I trained the mother who was a handy little filly and this one is very consistent, tries hard and likes a wet track,” Conlan said.

Pinyin provided apprentice Teo Nugent with his 100th career winner and the young rider later brought up a double aboard Pria Eclipse in the Spicer Thoroughbreds Handicap.