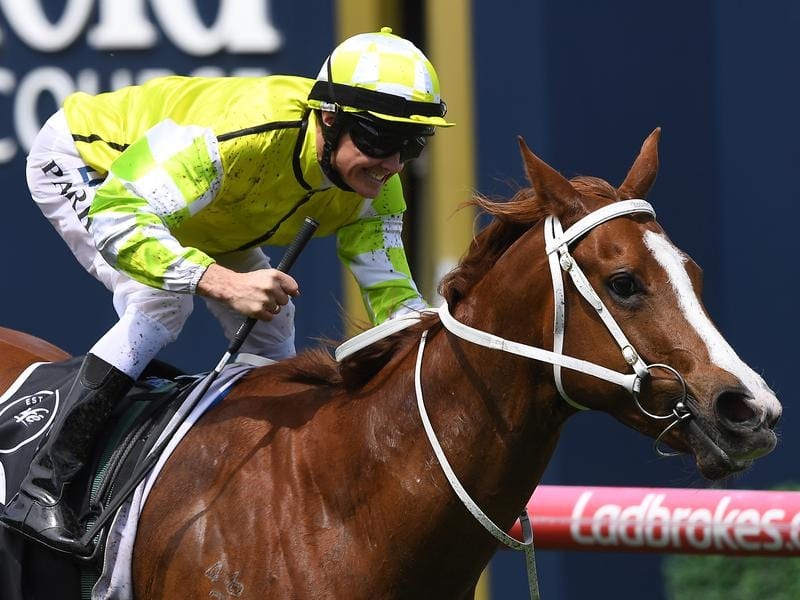 Eduardo is poised to make his debut for new trainer Joe Pride in the July Sprint at Rosehill.

Joe Pride has a theory around the longevity of thoroughbreds and by his calculations, Eduardo is a spring chicken despite rising seven.

Group One placed in the 2019 Oakleigh Plate, Eduardo recently joined Pride’s team and will make his debut for the stable in the July Sprint (1100m) at Rosehill on Saturday.

It will be just his 13th start, a light workload for a six-year-old and something Pride hopes will add years to Eduardo’s career.

“You’ve got a certain amount of starts in a horse,” Pride said.

“You diminish the amount of starts you’re going to get out of it by racing it early and if you don’t start until later on, then when they are six they’re really only four or five in wear and tear terms.

Pride is seeing evidence of his theory on the training track.

Although diminutive in stature for a sprinter, Eduardo is naturally athletic and his body language has Pride convinced the horse’s zest for racing remains strong.

The gelding cruised around Warwick Farm to win a recent barrier trial and Pride has seen a similar attitude in his work.

“He looks like he’s running for fun,” Pride said.

“He is enjoying it, his ears are pricked, it’s a bit of a game for him and generally when they trial like that they race well.”

The July Sprint has attracted a select field led by Newcastle Newmarket winner Special Reward, who is resuming, and Godolphin’s Roheryn, a dynamic first-up winner.

Despite the quality of opposition, Pride expects Eduardo to hold his own and hopes the race can be a carnival starting point towards features such as next month’s Group Two Missile Stakes.

“I will be disappointed if I don’t see him run well because everything is adding up to a good performance,” Pride said.

“It’s a way to line him up and hopefully launch him into the spring.”

Another recent recruit, Minted, will also make his metropolitan debut for the stable in the final race.

The three-year-old lumped a big weight to score at Newcastle and Pride said he had continued to improve.

“His win at Newcastle was that of a horse with considerable upside,” Pride said.

“He got back and reeled them in with 61 on his back and he’s only a little bloke.”