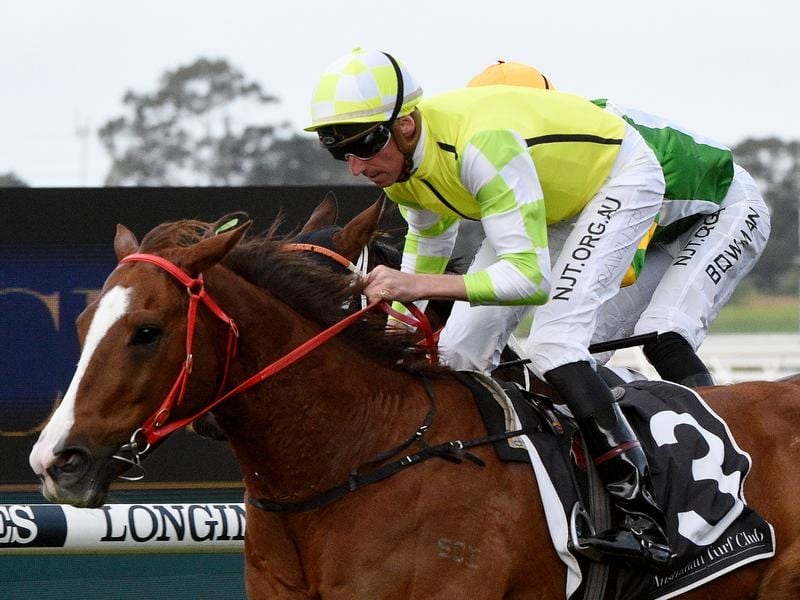 Eduardo has won his first start for new trainer Joe Pride at Rosehill.

Former Victorian Eduardo has made a winning debut for new trainer Joe Pride, holding off the fast-finishing Roheryn to claim the July Sprint at Rosehill.

Group One placed in last year’s Oakleigh Plate, Eduardo had lost form during the autumn and was transferred to Pride after finishing midfield in a Flemington sprint in May.

Renowned for his success rejuvenating the careers of tried horses, Pride was unsure what to expect from Eduardo ($3.70) on Saturday and whether he retained his zest for racing.

But the six-year-old confirmed he still had plenty to offer, zipping past the leaders in the straight and kicking resolutely under Nash Rawiller to deny Godolphin’s Roheryn ($2.45 fav) by a short neck.

Glenall ($6) was the same margin away third.

“There was a bit of a moment of truth for him at about the furlong but I was happy to see him really respond under Nash’s riding and give that good kick,” Pride said.

“There’s a good chance we will come here in a couple of weeks for the Missile but I’m just happy to have him back.”

Both Pride and Rawiller felt there was good improvement to come from Eduardo, whose last success was a Group Two victory 21 months ago.

Rawiller brought up a double a race later aboard the Kris Lees-trained Korcho, an Australian Bloodstock import who has now won his past two in succession.