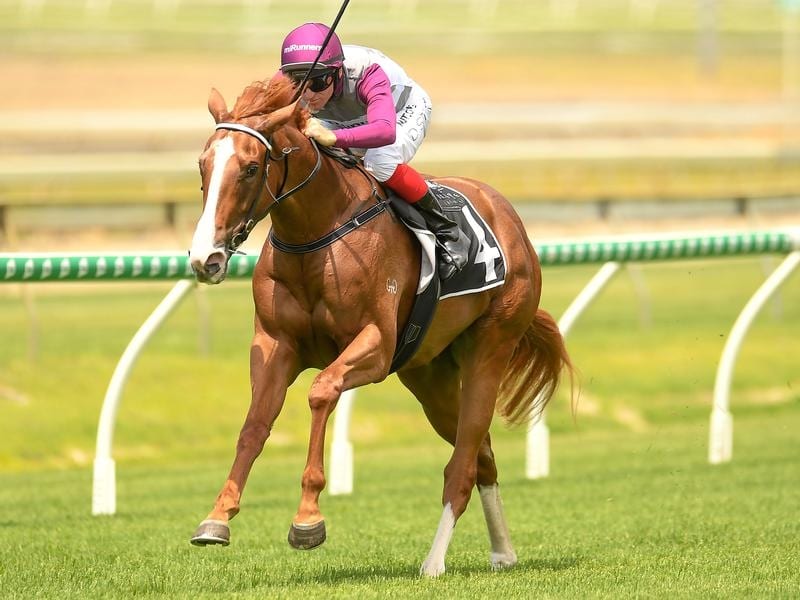 Dusty Tycoon has won a barrier trial on her way to the $2 million Magic Million 2YO Classic.

Unbeaten Brisbane filly Dusty Tycoon has shown the interstate horses will not have it all their own way in the Magic Millions 2YO Classic with an impressive barrier trial win at Doomben.

Dusty Tycoon was having her first serious hit-out since winning her second race from two starts at Doomben on November 30.

She is a MiRunners-syndicated horse with hundreds of owners and a good percentage were on hand to see her run in the trial.

Dusty Tycoon sat two-deep for most of the 840m-trial before beating another Magic Millions hopeful , Kavak by 1-1/2 lengths.

Trainer Robert Heathcote said Dusty Tycoon was on the fresh side and the trial had been exactly what she needed.

“The two-year-olds don’t get under 50 seconds for the 840 metres often and she has run 49 and a tick,” Heathcote said.

“Kavak is a smart horse and it is always a good sign when you could kick a football back to third.

“I was thinking of running her in the McLachlan last Saturday but in the end the trial option was best.

“All we need is a good barrier in the Millions and she will be there. Barrier three to six as that would be nice.”

On the Gold Coast a two-year-old trial which was mooted as a Millions indicator fell away with scratchings and only three horses ran.

The Ciaron Maher/David Eustace partnership instead worked their Classic horses Rathlin and Away Game on the course proper.