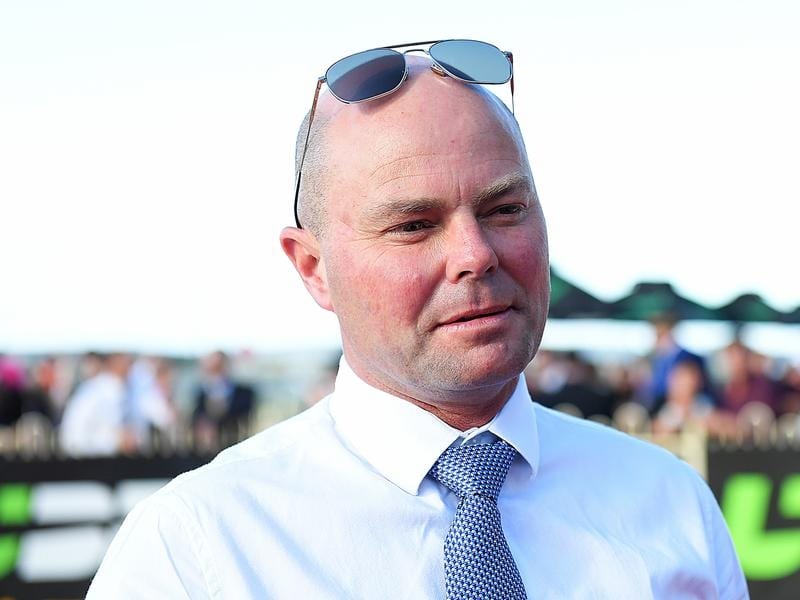 Trainer Matt Dunn will try to get Verbal Assault into the Magic Millions 2YO Classic.

Trainer Matt Dunn has had a big week and also unveiled another possible contender for the $2 million Magic Millions 2YO Classic.

Dunn had five winners on Friday, four on at his home track of Murwillumbah, and one at Doomben on Saturday to give him six winners for the week.

He already has one of the main chances in the Magic Millions 2YO Classic, Lady Banff, and hopes to have another with Murwillumbah winner Verbal Assault.

The colt was a $130,000 buy for Dunn and his bloodstock agent Neil Jenkinson at the Magic Millions Yearling Sales.

Verbal Assault is well down the list of qualifiers with $16,825 and Dunn is looking for a way to boost his prize money to get into the race at the Gold Coast on January 11.

“We had six winners in a day at Murwillumbah last year but it was a good day on Friday with some promising horses,” Dunn said.

Verbal Assault was never extended to win a Two-Year-Old Handicap (1000m) at Murwillumbah by five lengths.

“He is a nice colt and he is starting to learn what it is all about. Verbal Assault has got better with time and he did trial well leading into the race,” Dunn said.

“He will run in the colts and geldings division of the two-year-old race the week before the Magic Millions Classic.

“Hopefully, that can get him into the Classic. He would be a chance if he continues to improve.”

Jenkinson and Dunn are great friends and have been associated with Magic Millions race winners including Care To Think and Madotti.

“Neil had a birthday last week so it would be good to give him a belated present with another Millions win,” Dunn said.