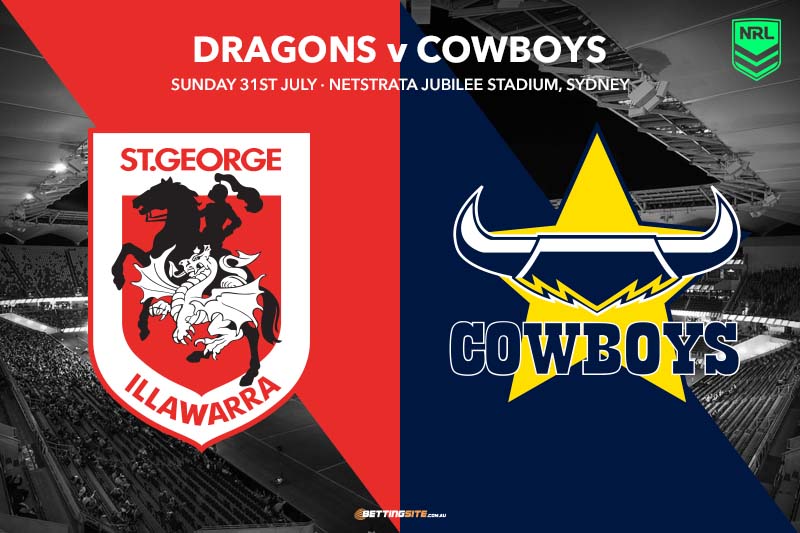 The St George-Illawarra Dragons will attempt to keep their season alive when they host the North Queensland Cowboys on Sunday afternoon in round 20 of the NRL 2022 Premiership season.

The Dragons shocked many with a 20-6 win over the Sea Eagles to remain in contention for Finals football, but will their bubble burst when they face the high-flying North Queensland Cowboys?

Every conversation involving the St George Illawarra Dragons starts and ends with Ben Hunt. He scored a double in what was surely another three-point effort in the Dally M race, and if the Dragons are to overcome a negative differential, he will need more help to take down the Cowboys.

Defensively they were solid last week, but the North Queensland Cowboys present a unique challenge.

Will the Saints have the answers for a team who move the ball sideways at will? Is there any way they can get them into a grinding game to suit them better? The +8 line might be worth exploring as there is still some questions about their opponent playing interstate, and Kogarah has been kind to the Saints traditionally. A curious selection is Tyrell Sloan on the interchange bench, who has finally earned a recall to the top grade. Will there be a late switch between him and Moses Mbye? It is hard to see why Sloan has been picked otherwise and it could lead to some clunkiness in their attack.

The wingers for the Saints aren’t good value in the try scoring market with the centres inside them reluctant to pass, so why not stick with Ben Hunt at the $4 price with the top Australian bookmakers?

The Cowboys should be coming into this game off a shock loss, but instead it’s a controversial win. Don’t let the two points fool you… they were beaten by a $9 outsider last weekend purely because they disrespected their opponent. 16 errors and a lot of passes hitting the ground because they thought they could just turn up and throw the ball around and run up a cricket score. For 10 minutes it looked like they were going to do that, but this week will determine if they have learned a valuable lesson in the build-up to Finals.

If a performance that lacked discipline gets the right reaction, there is no reason why they shouldn’t win this game. It will most likely be at the 1-12 margin, as travelling to Sydney has never been a guarantee for success for the Townsville boys.

Their last visit to Sydney for a game was against Manly and it took three tries in six minutes at the death to get two points they were never entitled to.
If the Cowboys perform well this round and win, they can go some way to silencing their doubters.

When they’ve won in Sydney in previous years they’ve gone on deep Finals runs, and when they don’t, they’re pretenders.

Ben Hunt and Chad Townsend. Both have been fantastic on-field generals for their respective clubs in 2022, but it feels like even if Hunt plays better he might not necessarily get the win.

The Cowboys at 1-12 points feels like the way to go. But be cautious.

Cowboys 1-12 with Scott Drinkwater and Ben Hunt to score tries pays $23.30 at Ladbrokes.