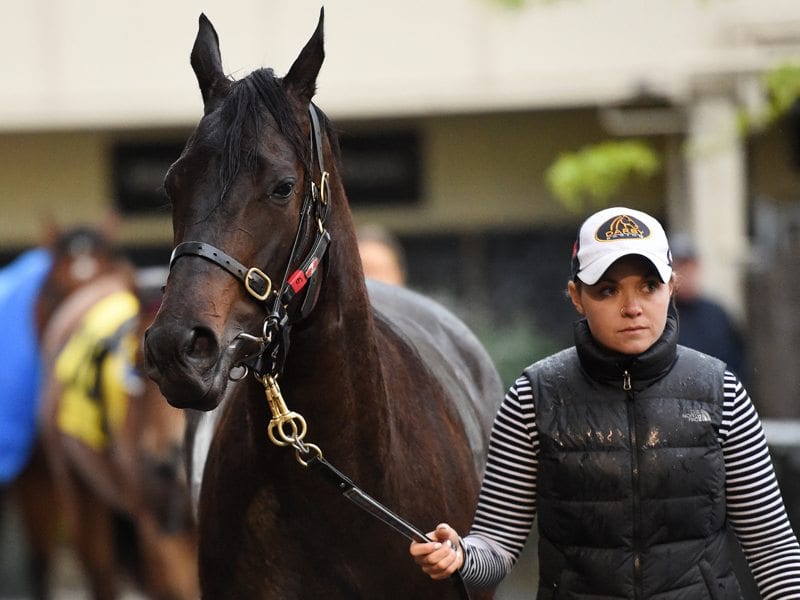 Trainer David Vandyke admits the distance is his only concern with Yankee Rose in the VRC Oaks.

Trainer David Vandyke admits the distance is his only concern with star filly Yankee Rose, the short-priced favourite to continue a memorable 2016 in the $1 million VRC Oaks.

Yankee Rose can cap an unforgettable 12 months for her connections in Thursday’s Classic for fillies having already won two Group One races this year and been placed in the Golden Slipper and Cox Plate.

But despite bookmakers putting Yankee Rose up at odds-on for the 2500m Group One race at Flemington, Vandyke admits the filly is yet to be proven at the distance.

“She’s never been over the trip,” Vandyke said.

“The furthest she has gone is 2040 metres but if she runs it out she’ll be very hard to beat.

“She’s top class. She finished next to Hartnell in the Cox Plate and he ran third in the Melbourne Cup. She beat Prized Icon, who won the Derby, in the Champion Stakes.

“She is very short for a horse that’s never run 2500, but I guess everyone is banking on the fact that she’s a class animal,” Vandyke said.

“She’s run in six Group One races consecutively and she’s competed against the best. So that’s why she’s $1.65.

‘Her preparation has gone off faultlessly and I know she’s in the right condition to handle the 2500.”

Yankee Rose was a $10,000 yearling and has already amassed more than $2 million prize money from her eight starts in the past year.

“It’s been amazing for myself and the owners, just a group of battlers,” Vandyke said.

“And it’s been a fairytale come true – win, lose or draw tomorrow.”

The TAB has installed Yankee Rose as the $13 favourite for next year’s Melbourne Cup ahead of Tuesday’s Cup winner Almandin, Hartnell, Prized Icon and Sacred Elixir at $17.

“Let’s see if she can run 2500 before we think about two miles,” Vandyke said.

“It’s very flattering to have the Melbourne Cup favourite for next year and I’ll think about that after tomorrow’s performance.”