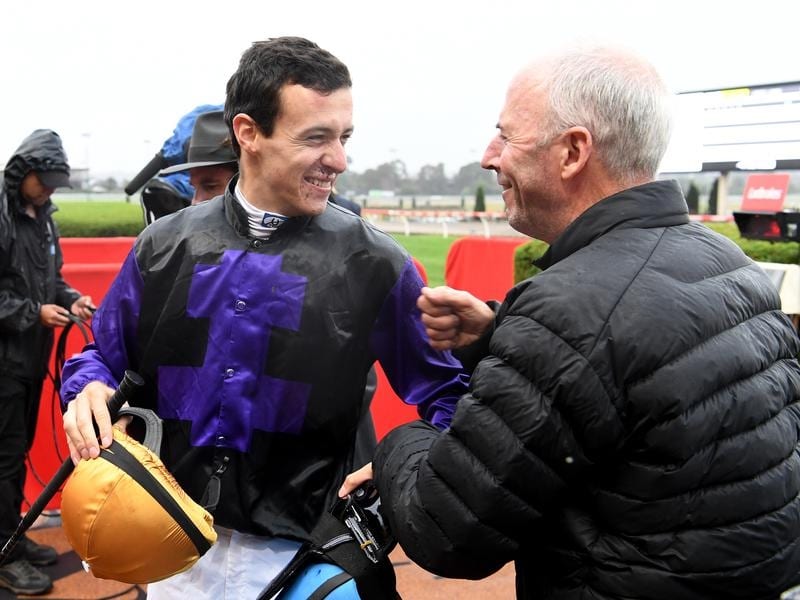 Trainer John Moloney (r) will saddle up Difficult in the first 2yo race of the season at Flemington.

The first two-year-old race of the Australian season has attracted a field of eight at Flemington’s solitary midweek meeting.

Introduced this year as a lead-up to the Maribyrnong Trial on October 5, the Darley Spring Preview will be run over the unusual distance of 900m.

Wednesday’s race gives connections of two-year-olds the opportunity to see where their youngster sits under race day pressure and trainer John Moloney is looking forward to giving Difficult that chance.

A daughter of All Too Hard, Difficult is a half-sister to Stingray, who Moloney trained to become a two-time winner as a two-year-old.

Moloney is hoping for a better result from Difficult on Wednesday with the filly winning an 800m trial on heavy ground on September 2, lowering the colours of Wednesday’s rival Divine Caprice.

“She doesn’t look anything flash. She’s got hair on her that is three inches long, but she’s done everything to be in a race,” Moloney said.

“There’s obviously not many ready as you can see by the small numbers, but I’m happy to send her out and give it a go.

“Whether she’s good enough to win, I don’t know, but she’s shown enough and did win the trial nicely at Cranbourne.

Difficult has opened the $3.60 favourite ahead of the John McArdle-trained Cut It Out ($4.60) who won a Cranbourne trial on September 17.