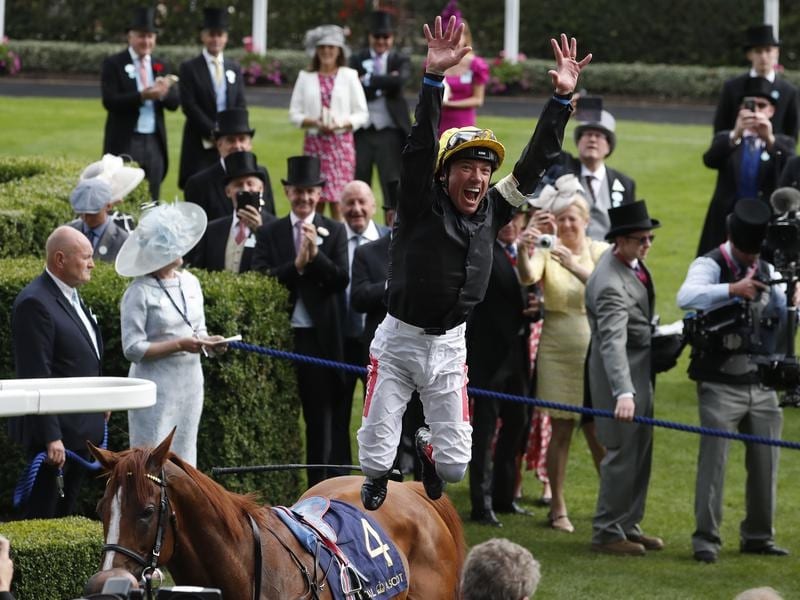 Frankie Dettori has celebrated four winners at Royal Ascot including the Gold Cup on Stradivarius.

Frankie Dettori has been the star of the show on Gold Cup day at Royal Ascot, riding four winners including Stradivarius in the main event.

Dettori kicked off his afternoon with Al’Ali in the Norfolk Stakes for Simon Crisford, before winning the Hampton Court aboard the Sir Michael Stoute-trained Sangarius and the Ribblesdale Stakes with John Gosden’s Star Catcher.

It was then all eyes on the Gold Cup with Dettori again victorious through the Gosden-trained defending champion Stradivarius.

“This 48-year-old kid takes this to another level, like a Wimbledon semi-final and final. He’s riding quite beautifully. He occasionally listens to me, but not too much,” Gosden said.

In winning his seventh successive race, Stradivarius created his own piece of history although those who took the even money had a little anxious moment early in the straight.

For once Dettori appeared to be in the wrong place as he was stuck behind horses, with Dee Ex Bee still in front alongside Master Of Reality, but as soon as a gap appeared the chestnut was through it like a shot.

“What a horse, he got me out of trouble,” Dettori said.

“He’s the horse for the big occasion and people love him.

“It’s great for everyone connected with the horse – every time he runs he delivers.”

Ascot’s official bookmaking partner Betfred breathed a huge sigh of relief, along with the whole industry, when Dettori was beaten into second in the fifth race.

The bookies had been bracing themselves for a repeat of an Ascot meeting in 1996 when Dettori won all seven races on the card.

“Frankie riding the first four and especially getting a tune out of Stradivarius in the big one was very costly,” spokesman Mark Pearson said: .

“However every bookie is going to bed tonight relieved because if Frankie had done the unthinkable it would have been the biggest pay-out in bookmaking history.”