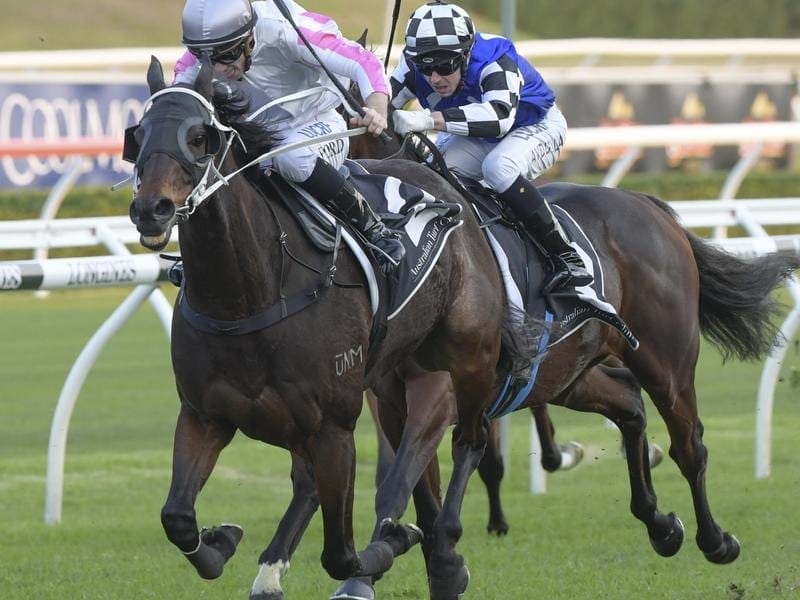 Veteran stayer Destiny’s Kiss has successive Wyong Gold Cups in his sights despite a big weight.

The smallest horse in Joe Pride’s stable is also the one that carries the biggest weights with Destiny’s Kiss lumbered with 61kg for his defence of the Wyong Gold Cup.

The 10-year-old is also the oldest horse in training at Pride’s Warwick Farm base but shows all the signs he still enjoys racing.

Godolphin’s Morton’s Fork is the TAB’s $3.40 favourite for Friday’s 2100m-Listed race on the back of his win over 2040m at Moonee Valley at the beginning of this month.

Despite Destiny’s Kiss finishing 10th of the 13 runners in the Premier’s Cup last Saturday week, Pride says it was a pass mark and the gelding is ready for Wyong where he is a $14 chance.

The trainer cites second favourite Harper’s Choice ($4.40) as a danger after he beat Destiny’s Kiss in the Winter Cup (2400m) on June 30 by half a length with a 7.5kg weight advantage.

“Harper’s Choice goes up to 56 (kg) so now there is five kilos between them,” Pride said.

“Destiny’s Kiss is in great order. He doesn’t know how old he is.

“He was OK last start and is following the same preparation as last year.”

Ryan decided against running him in last Saturday’s Premier’s Cup won by Godolphin’s Avilius, preferring to try for the Wyong-Newcastle Cup double on his way to a start in the Group One Metropolitan Handicap, the same program Pride has in mind for Destiny’s Kiss.

Harper’s Choice struggled with a high benchmark after he ran second to Jon Snow in the 2017 Australian Derby.

Now he is down in the weights, Ryan believes Harper’s Choice can be a contender in staying races.

“Harper’s Choice is terrific,” Ryan said. “I worked him with Red Excitement the other day and they both went very well,” Ryan said.

“Neither of them usually works with a mate but I wanted them both to have a decent gallop.”

Red Excitement will run in Saturday’s Group Two Chelmsford Stakes (1600m) in which he finished second last year to Winx.