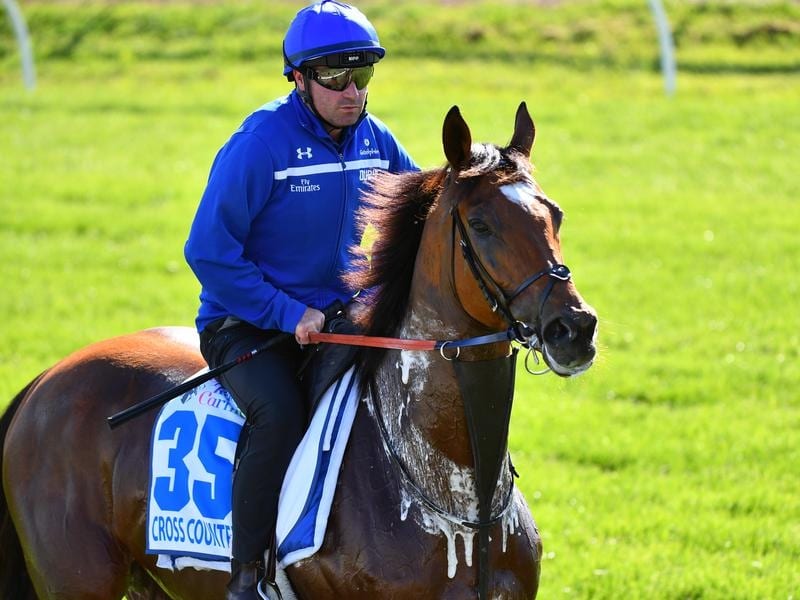 Melbourne Cup winner Cross Counter has arrived in Australia to prepare for a defence of his title.

A bigger, stronger version of Cross Counter has returned to Australia in a bid to defend his Melbourne Cup crown.

Cross Counter was one of five Godolphin-owned horses trained by Charlie Appleby to arrive in Melbourne on Saturday and is in quarantine at Werribee.

Cross Counter will be joined in the $8 million Melbourne Cup at Flemington on November 5 by stablemate Ispolini.

Chris Connett, Appleby’s travelling foreman, said it was good to be back in Australia on a shorter trip than 12 months ago.

Last year Cross Counter, who arrived five weeks before the Melbourne Cup, had a slight setback before going on to defeat Marmelo and Prince Of Arran in the Cup.

Cross Counter rises 6.5kg from 51kg last year and Connett believes the stayer, a northern hemisphere four-year-old, has made the improvement.

“He’s strengthened up from three to four physically. Last year he was a bit of an angular type and this time he’s filled out his frame a bit more.

“Charlie said after last year’s Cup that we would like to come back and defend the crown and he’s acquitted himself well enough in England at Group One level.

In two of those races he clashed with Stradivarius.

“He has taken on the world’s best stayer in Stradivarius a couple of times and to be beaten by him is no disgrace, while in the Irish St Leger things didn’t quite work out,” Connett said.

“They’ve been very solid runs without being spectacular.”

Ispolini has a 2.5kg weight swing over Cross Counter from their Dubai meeting.

Walton Street could run in either the Moonee Valley or Bendigo Cups with D’bai and Setting Sail earmarked for races at Sandown at the back-end of the spring carnival.