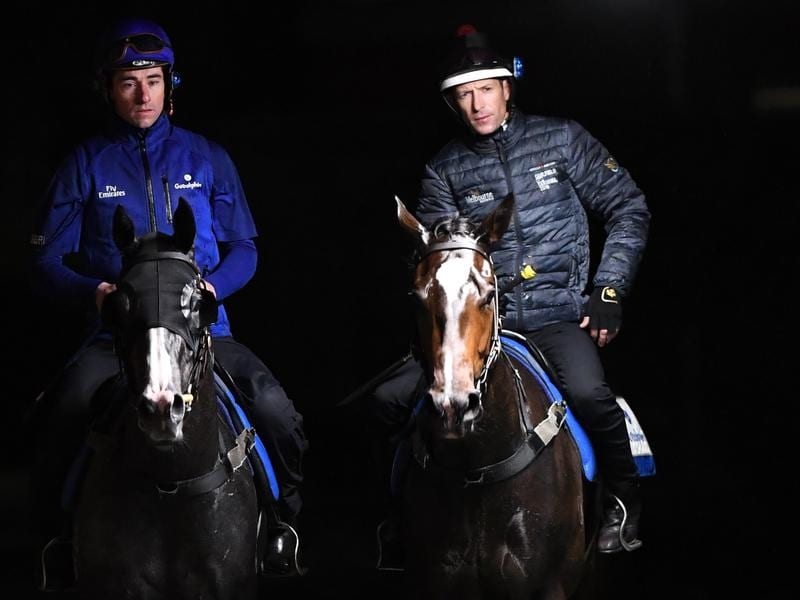 Flit (r) is the favourite for the Thousand Guineas in which stablemate Tenley (l) will also run.

The only three-year-old filly still in Cox Plate contention is the favourite to claim her first Group One win in the Thousand Guineas.

Godolphin-owned Flit is the $2.30 favourite for Saturday’s Thousand Guineas at Caulfield which trainer James Cummings says is the focus.

Flit was earlier this week paid up at the third acceptance stage for the weight-for-age Cox Plate on October 26, the only three-year-old filly among 35 remaining entries.

“We’ve kept her in the acceptances and we don’t need to rush that at the moment,” Cummings said.

“She is third-up in the Thousand Guineas and that’s a target race for her.

“It’s very important before we go considering anything past that point.”

Flit was a luckless runner when ninth in the Thousand Guineas Prelude (1400m) in the second start of her spring campaign and gets her chance to shine on Saturday, stepping to 1600m for the first time.

Along with the Thousand Guineas favourite, Cummings also has $12 chance Tenley in the race.

He feels Flit has come on well since the Prelude when she was held up for clear running over the final 200m.

“If anything Tenley might have paraded a bit better than her in the Prelude and I think now Flit has well and truly caught up with her and I think she’s really going to stamp herself as a quality filly if she gets the opportunity this time,” Cummings said.

The trainer believes the decision to target the Thousand Guineas rather than go up against Funstar and Probabeel in last Saturday’s Flight Stakes at Randwick, also a 1600m Group One race for three-year-old fillies, can prove the right one.

“She has had a preparation that was completely set for a 1600-metre target that was desirable for us,” Cummings said.

“We made the call early that we’d lean towards the Thousand Guineas over the Flight Stakes and the way that field is shaping up I think that has worked in our favour.

“Win, lose or draw, there’s no way she would have started that price against the Flight Stakes winner or even the second horse (Probabeel) last week.”

Cummings believes Flit has Tenley’s measure but Tenley, who was 11th in the Prelude, will have blinkers reapplied on Saturday.

“She just stumbled coming out of the gates last start and I think she just needs to get her focus back together to produce a better performance,” Cummings said.