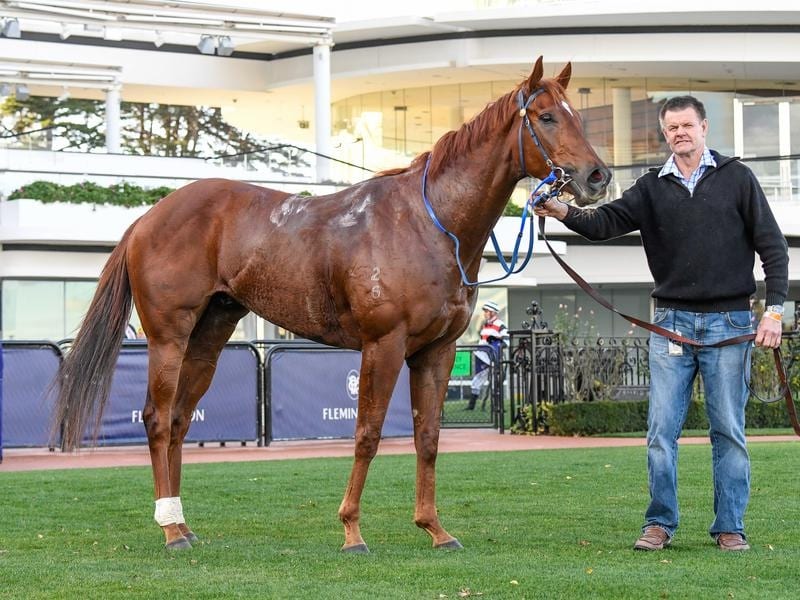 Connections of Front Page have kept the exciting gelding despite lucrative offers from overseas.

Connections of impressive Flemington winner Front Page have knocked back some sizeable offers from Hong Kong for the promising gelding.

Front Page registered his fourth win from six starts in taking out the Listed AR Creswick Stakes on Saturday.

It was the three-year-old’s first start on a metropolitan track and followed two wins at Albury and one at Wangaratta.

Part-owner Paul Duryea, son of the gelding’s trainer Geoff, would not disclose the highest bid but said offers for Front Page ranged between $1 million and $1.5 million.

A meeting between the group of around 12 owners on Monday night decided to keep Front Page and race him in Australia.

Duryea said the vote was unanimous.

Duryea said the first offers for Front Page started two minutes after the gelding’s 2-3/4 length win on Saturday and had continued through until Tuesday morning.

Front Page is heading off for a spell after winning Saturday’s target race which Duryea said was more about giving connections an idea of the gelding’s potential.

“It’s fine to have ability at home, but you’ve got to go and do it in the city and it was there for everyone to see on Saturday,” Duryea said.

“I must admit we were a bit shocked by the end result and the ease in which he did it.”

The Duryea stable was planning a tilt at The Kosciuszko at Randwick in October for Front Page’s older sister News Girl and will likely head to that race with the younger sibling.

Front Page is the $6 second favourite behind Snitz at $4.50 while News Girl is an $11 chance in pre-nomination early betting on The Kosciuszko.