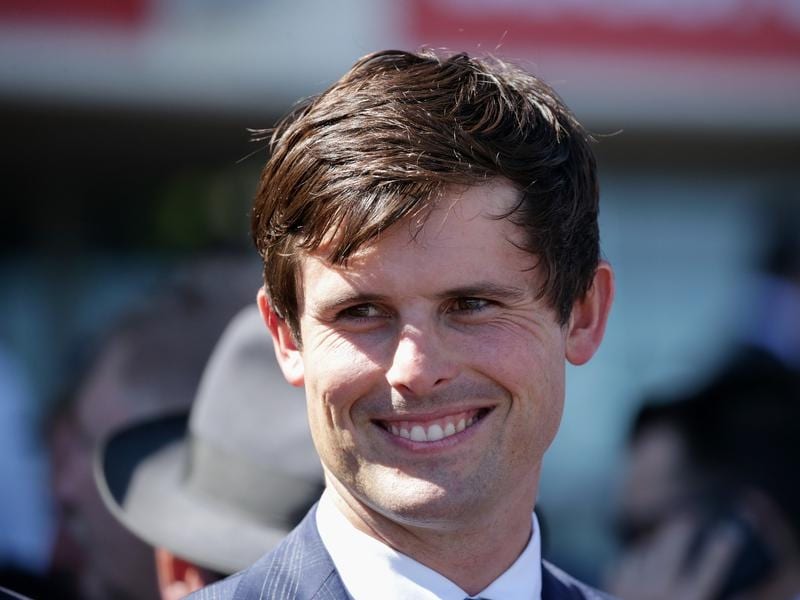 Trainer James Cummings can make a case for all five of the stable’s Golden Slipper runners.

YES YES YES (Trainer Chris Waller): “He is the right horse for the race but it is made a little harder by the barrier draw where he will start from the extreme outside. The horse at least comes into the race with very good form and is well prepared and I think he will get through the conditions without too much trouble.”

MICROPHONE (Trainer James Cummings): “He’s thrived since his Group Two Skyline victory and I feel that he’s going to be suited by the three-week break into another high-pressure race.”

TIME TO REIGN (Trainer Gary Portelli): “If he didn’t start on that dry track last start he would probably be well in the market. I still reckon that he’s the same horse that won the Silver Slipper.”

FREE OF DEBT (Trainer Chris Bieg): “He’s done nothing wrong. We’re a small stable in the big world, I guess that’s the reflection of the market. That stable support is not quite there. But he doesn’t know he is $34 and he will be giving them a scare on Saturday.”

COSMIC FORCE (Co-trainer Peter Snowden): “What he’s done in the past three or four weeks has been just what you want to see from a two-year-old going forward. “You can’t take away what we saw last Saturday. If we can get that horse to do a similar sort of thing this Saturday it’s going to bring him in with a great chance.”

DUBIOUS (Co-trainer Ciaron Maher): “I’m rapt with him. His Todman run was super. He didn’t get the momentum into the race but I thought he finished off really well. He’s got the shades on, he’s galloped well. Everything has been based around this race from when he won the Breeders’ Plate and I think it’s gone swimmingly.”

LYRE (Assistant trainer Sam Freedman): “She has come through the Blue Diamond well. She trialled well at Randwick and her work has been good. We couldn’t be happier with her condition.”

LANKAN STAR (Co-trainer Tom Dabernig): “Her placing in the Blue Diamond was excellent. Last start she drew off the track and never had any luck. She’s got to handle the seven-day back-up but she should be well-positioned from that good gate.”

TENLEY (Trainer James Cummings): “The exciting thing about Tenley is not only that she is undefeated in three starts, but that her best win came in the Reisling Stakes two weeks ago. She steps up to 1200m for the first time and she looks as though she’ll excel at the extra trip against more testing opposition.”

PIN SEC (Trainer James Cummings): “She obliterated her opponents in the Group Three Black Opal a fortnight ago and arrives here fitter second up.”

ANAHEED: (Co-trainer Peter Snowden) “Tim Clark said she’s just a different horse on wet ground (after a gallop on Tuesday morning) so I think that definitely enhances her chances. I think it’s a perfect draw (7) for her.”

KIAMICHI (Trainer James Cummings): “She brings a wonderful Rosehill record into the Golden Slipper, arriving here on the back of her determined wet-track victory in the Magic Night Stakes.”

CATCH ME (Co-trainer Peter Snowden) “I tried to force the issue come Blue Diamond day and put blinkers on her. It just backfired big time. She over-raced badly.”

VINCERE VOLARE (Trainer Tony Gollan): “All I can say is Vincere Volare is fit and happy so I am really looking forward to it.”

EXHILARATES (Trainer James Cummings): “She beat all but her flying stablemate in her fresh-up return run in the Reisling. I expect to see improvement coming out of that run which I feel has put her physically in a very good place for what is a monumental assignment.”

LOVING GABY (Co-trainer Ciaron Maher): “We wanted her here in tip-top condition so we thought just a soft trial after the Blue Diamond and straight in to the Slipper was ideal. She’s a big strong filly and is still a little bit raw. But she’s very good.”