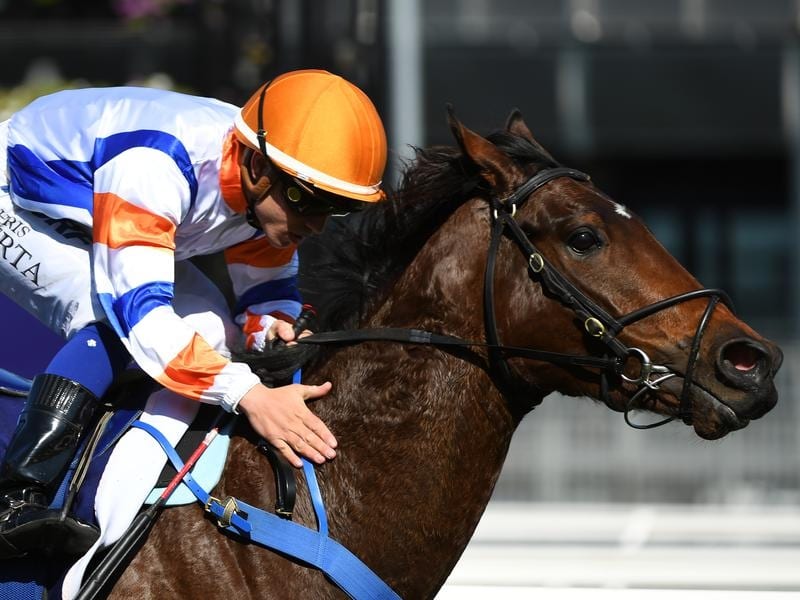 The Tony McEvoy-trained Vinland gets conditions to suit when he runs at Flemingotn.

One trainer not unhappy with the cold snap and associated rain sweeping Victoria is Tony McEvoy who has a number of quality contenders engaged at Flemington.

The track is already in the soft range for Saturday’s meeting and with rain forecast for race-day, it may deteriorate.

Vinland, the winner of five of his 19 starts, has been a cause of frustration for McEvoy.

“If there is any form of jar in the track he just protects himself,” McEvoy said.

“He’s going to get beautiful conditions on Saturday and I don’t think we’ve seen the best of this horse.

“I’ve seen him do some incredible things on the track suggesting to me he’s a high class horse.

“I think his time is still ahead of him.”

Vinland has not started since finishing last at Listed level at Eagle Farm on June 22 which followed a narrow win at the same track two weeks earlier.

The gelding won a Murray Bridge trial on July 25 and McEvoy had no hesitation in transporting him to Melbourne after looking at the weather forecast.

McEvoy is eagerly awaiting the spring campaign of Oohood who makes her reappearance in Saturday’s Aurie’s Star Handicap (1200m).

Oohood’s autumn campaign was cut short after she failed to run up to expectations in two runs after a good spring preparation which culminated in victory in the Group One Flight Stakes at Randwick.

The four-year-old started her spring preparation at McEvoy’s Angaston property in South Australia before heading to his Melbourne base at Flemington.

“She galloped super in her final hit-out for Saturday where she wanted to go very quick,” McEvoy said.

“I think she’s in the right frame of mind judging by her trackwork and jump-outs after the disappointment of her last preparation, but I want to see her do it again under race conditions.”