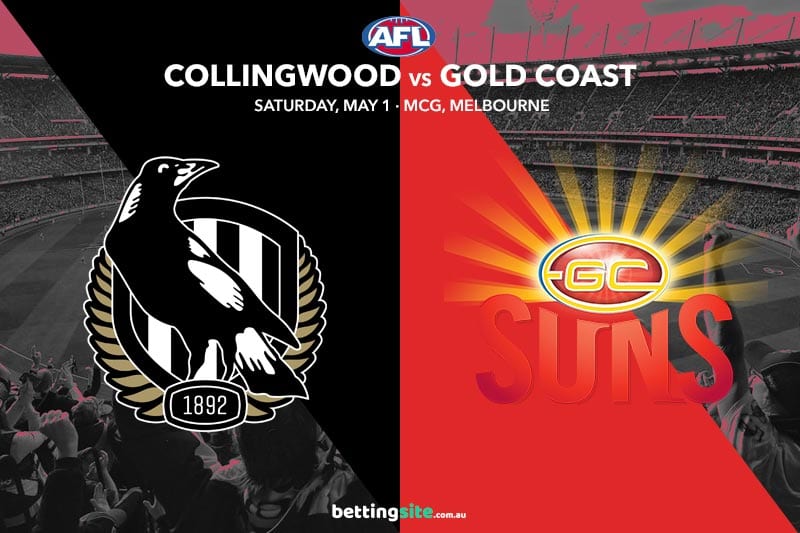 Collingwood and the Gold Coast Suns will kick off a big afternoon of footy on Saturday when they clash at the MCG in Round 7 of the 2021 AFL Premiership.

Nathan Buckley and the Pies are seemingly at the crossroads after going 1-5 to start the season, while Stuart Dew and the Suns have improved their win-loss record to 2-4 following a resounding win over the Sydney Swans in Round 6.

Despite online bookmakers having the Suns as outsiders at odds of $2.85, most observers seem to think Collingwood are vulnerable favourites at the $1.46 price.

Collingwood are enduring their worst start to a season since 2005 and are in desperate need of a win after suffering four consecutive losses. The Pies have lacked prowess in the forward line, but the inclusion of Darcy Cameron into their forward mix last week showed a bit of promise. The former Swan had a career-best game on ANZAC Day when gathering 22 touches, clunking 10 marks and slotting three goals, and Sportsbet has him marked at $3.40 to kick a treble or better this week.

Gold Coast could not have been any more impressive than they were against the Swans last weekend and should appreciate getting to the MCG for the first time this year. This young Suns lineup will look to outplay Collingwood in all facets of the game, led by the impressive trio of Jack Lukosius, Ben King and Izak Rankine. Small forwards have long been an issue for Collingwood to contain, and we expect Rankine to shine in his senior game at the ‘G. We are happy to take the $2.55 on offer from BetOnline for the lively forward to kick two or more goals on Saturday.

Both Jack Crisp and Jack Lukosius will be pivotal to their respective sides’ chances on Saturday with their run off half-back and precise ball use. Crisp is averaging a fraction under 30 touches a game this season, with his counterpart averaging 20 disposals. This game could well come down to which Jacks gives his forwards the better service on the day.

The Pies are favourites, but their recent form suggests the Suns will be in this one all game. Collingwood struggle these days to blow teams away, and the methodical Suns will matchup really well against the 1-5 Pies.

Brodie Grundy to get 20+ disposals

Brodie Grundy has been a fair way off his absolute best this year, but a big performance could take the Pies a long way to victory against the Suns. Grundy was outpointed by Essendon’s Andrew Phillips and Peter Wright despite having 40 hitouts in the ANZAC Day game, so he will look to have a bigger impact against the Suns with their best ruckman, Jarrod Witts, on the sidelines. He will run all day and is smart in accumulating disposals around the ground, the $1.72 on offer for him to rack up 20 touches is a must have in all same-game multis.

This matchup is far from a main event ticket, but the Pies and Suns will keep this game close all day. Rankine will give the Pies defenders nightmares on Saturday, whilst the big boys of Darcy Cameron and Brodie Grundy will attempt to stretch the Suns around the ground in what is shaping up to be one of the closest games of the week.