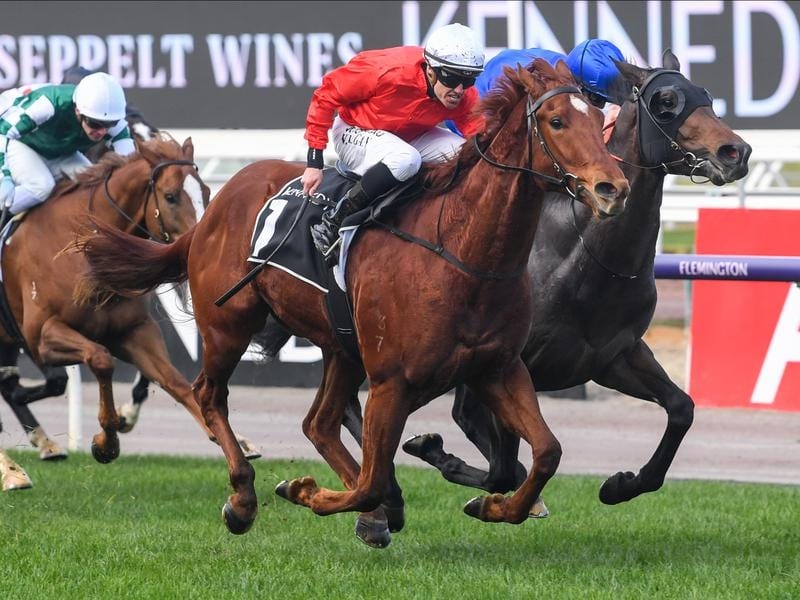 Cherry Tortoni has kept an unbeaten record to underline his promise in the Taj Rossi Series Final.

The Patrick Payne-trained Cherry Tortoni made it three wins from as many starts in Saturday’s Listed 1600m race for two-year-olds at Flemington, edging out Godolphin-owned colt Alcyone.

Johnny Get Angry is owned and trained by Pagan who has been granted a restricted training licence by Racing Victoria whereby he is allowed to train horses he owns.

The gelding, who was having his second start, was Pagan’s first runner as a trainer.

“He just got held up for a while but when he got out, he was terrific,” Pagan said.

“It really gives us a positive outlook for the future.”

Cherry Tortoni has family ties to former champion Tie The Knot, with his dam Tortoni being a half-sister to the 13-time Group One winner who Payne rode to three elite-level wins in the early 2000s.

Payne will give Cherry Tortoni a short break and plot a spring path.

“When (breeder and part-owner) Sandy Tait sent him to me he said this is one of the nicest horses I’ve sent down,” Payne said.

“He could be a Derby horse. I’ll be guided by him.

“I’m not sure how good he’d be against the smarter three-year-olds over 1200 or 1400 metres so I’ll give him short break and look to an early spring mile race.”

Cherry Tortoni settled in the second half of the field and jockey Billy Egan was able to have him in the clear on the outside from early in the straight with Alcyone making his run in front of the favourite.

Cherry Tortoni ($2.35) chimed in to hit the front at the 100m and edged a neck clear of Alcyone before he fought back late to get within a short-head on the line.

“He gave weight to the second horse so I think that might’ve been a difference towards the line finish but he went really well,” Payne said.