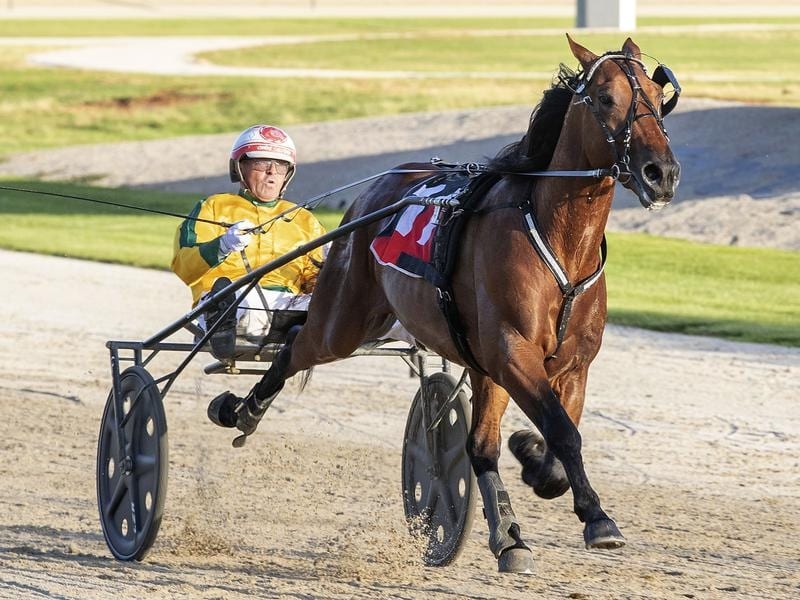 Champion reinsman Chris Alford is on track to make history again with a 100th Group One win.

Record-smashing reinsman Chris Alford is on the verge of making history yet again, with a chance to crack 100 Group One wins in Brisbane at the weekend.

The most successful reinsman in Australian history – having clocked almost 7000 wins – Alford will get two chances to secure another milestone on Saturday night at Albion Park.

“I have been pretty lucky throughout my career that I’ve driven so many good horses – you can’t win Group One races on bad horses – but it’s also a lot of hard work and a lot of miles.”

The 50-year-old, nicknamed ‘The Puppet’, had always wanted to be a reinsman and left school at age 13 to work with his horse trainer father.

He nabbed his first Group One in 1992 with two-year-old Golden Reign and the duo went on to win the Inter Dominion – “the Melbourne Cup of harness racing” – in New Zealand in 1995.

It was Alford’s most memorable Group One win.

“Golden Reign was the first really good horse I drove,” he said.

Long-time friend and harness racing commentator Adam Hamilton describes Alford as “one of the greatest drivers in the history of the sport”.

“He’s been regarded as one of the best for a while, but I think the last eight years he’s actually taken it to another level because he’s just been so dominant,” Hamilton told AAP.

While the draw has hampered Alford’s chances of a win with Be Happy Mach in the Australian Pacing Gold final for colts and geldings on Saturday, he drives the second favourite Jemstone in the fillies final.

“I don’t think he will be able to beat Jilliby Nitro in the first race as he’s drawn better, but in the second I think he has got a really good chance,” Hamilton said.

While Alford is outwardly humble about his success in the sport, his mate describes him as “fiercely competitive”.

“If you asked him, he would say it would be nice (to win) but I know he wants it,” Hamilton said.

“Part of what makes him as good as he is is how fiercely competitive he is. He has a really good mix of aggression yet patience.”

If successful on Saturday, Alford plans to celebrate with a couple of quiet beers.

“I’ll probably just move on to the next day, start all over again,” he said.

“At least if you have goals you have something to push yourself to. I think I’ve got about 101 wins to go to get to 7000 which nobody has ever done before, so I’ll be pushing on to that.”