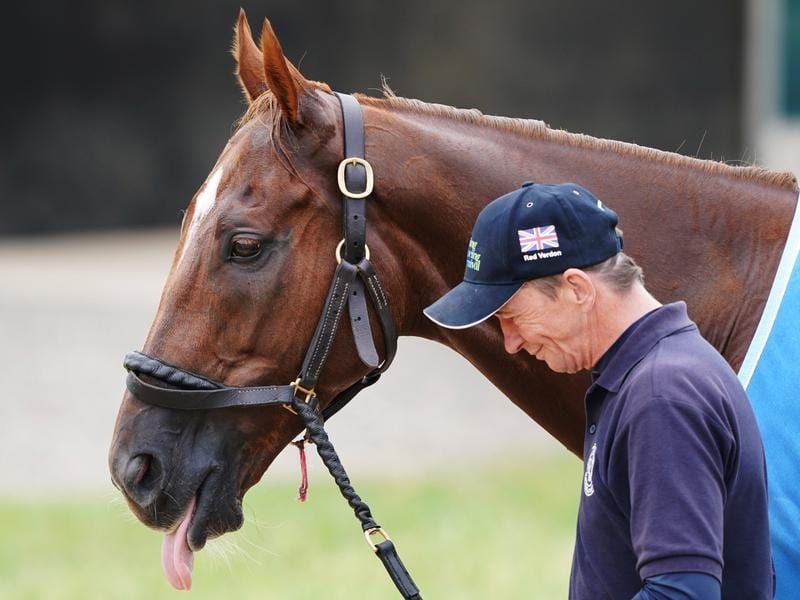 Red Verdon has overcome a leg injury which had threatened to keep the stayer out of the Caulfield Cup.

The Ed Dunlop-trained stayer trotted up lame on Friday but travelling foreman Robin Trevor-Jones says he has recovered and is set to run in the $5 million race on Saturday.

Red Verdon, who is at the Werribee quarantine facility, is set to gallop on Tuesday in preparation for the Caulfield Cup.

Following a nerve block injection in his right fore-leg on Friday, Red Verdon had an easy day on Saturday before exercising on Sunday and Monday.

“It was scanned, X-rayed and we couldn’t find anything wrong and he’s been sound since,” Trevor-Jones said.

“What he did we’ll never know.

“He’ll gallop tomorrow and God willing it will be on to the race.”

Red Verdon was a visitor to Melbourne for last year’s spring carnival.

He finished 11th behind Best Solution in the Caulfield Cup before a foot abscess robbed him of a start in the Melbourne Cup won by Cross Counter.

“I’m in touch with our vet, sending him videos and he says drive on, so we’re driving on.”

Trevor-Jones is unsure who will ride Red Verdon on Saturday but says he has been fielding a number of inquiries for the mount.

Visiting Irish jockey Pat Cosgrave, who rode Best Solution in 2018, called in to see Trevor-Jones to ask about the ride.

“I’ll leave that up to (owner) Mr Arculli and the trainer,” Trevor-Jones said.

“We can’t be happier with him now and we think he’s in good form.

Like all Caulfield Cup runners, Trevor-Jones said Red Verdon would undergo a Racing Victoria veterinary check on Thursday or Friday ahead of Saturday’s race.

Red Verdon is a $26 chance in latest Caulfield Cup markets headed by the Chris Waller-trained Finche and Japanese horse Mer De Grace at $8.