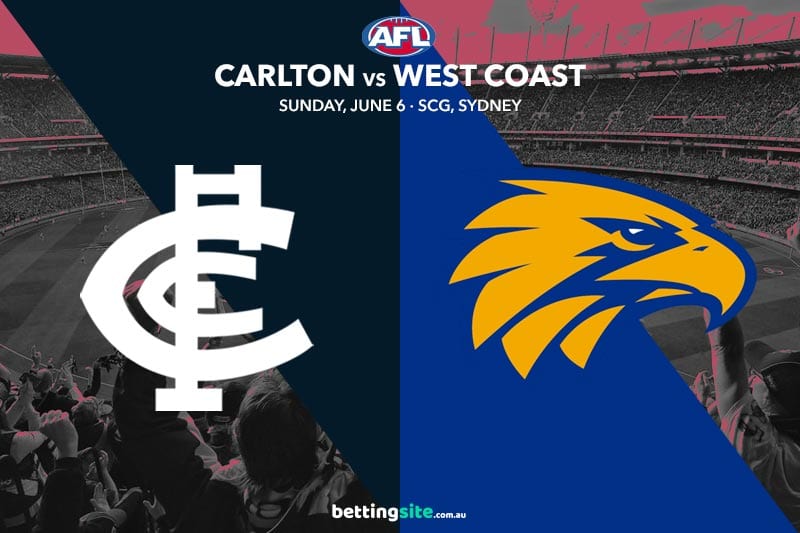 The Carlton Blues and West Coast Eagles will face off on neutral territory at the SCG this Sunday in round 12 of the 2021 AFL Premiership.

Adam Simpson’s Eagles were originally scheduled for a trip to the MCG, but the AFL was forced to relocate the match in order to avoid COVID-19 restrictions in Victoria.

Both clubs were unable to secure a victory in round 11 despite leading at stages during their respective contests. The Eagles blew a five-goal buffer against the Bombers at Optus Stadium, whereas the Blues could not hold off the Sydney Swans in the final quarter.

The biggest potential inclusion across both parties will be Carlton small forward Zac Fisher, who has missed over two months of footy with an ankle injury. Fisher is a perfect replacement for Michael Gibbons, who went down with a hamstring injury against the Swans last weekend.

Tim Kelly (knee) and Oscar Allen (concussion) are the newest members of the West Coast injury list, joining the likes of Luke Shuey, Jeremy McGovern and Liam Duggan on the sidelines.

The West Coast Eagles have kept a clean sheet against the Blues since 2015, winning each of their last six matches, but they will enter this clash as underdogs. David Teague’s men have been competitive in all of their last five 2021 matches, even against the top-ranked Demons and Bulldogs.

Carlton’s forward line has thrived this season off the back of Harry McKay and Eddie Betts, who have combined for 29 goals in the last five weeks. The Blues are very hard to stop when both Betts and McKay are on song.

Jacob Weitering is one of the brightest young defenders in the competition, and the Carlton stopper will be given the tough task of marking up on Jack Darling this weekend. Darling has kicked multiple goals in eight matches this season, while he has also slotted six goals from his last four encounters with the Blues. If Weitering can keep Darling quiet, Carlton should win.

Even though the Blues have lost their home-field advantage this week, they should get the job done against the Eagles on this occasion. After playing at the SCG in round 11, the Blues will have adapted to the ground, which should give them a slight edge this Sunday. Without Luke Shuey and Tim Kelly in the West Coast midfield, Sam Walsh and Patrick Cripps should overwhelm the Eagles.

With 13 goals in his last five outings, Eddie Betts is one of the in-form small forwards in the AFL. Eddie has slotted multiple goals in four of his last five matches with great accuracy, while the midfield advantage should give Carlton more forward 50 entries. We really like the value online bookmakers are offering for Betts this weekend.

The Blues will snap their six-game losing streak against the Eagles, dealing West Coast its third consecutive loss. Eddie Betts will light it up inside 50 for Carlton, while Jack Darling will be a lone contributor for the Eagles.