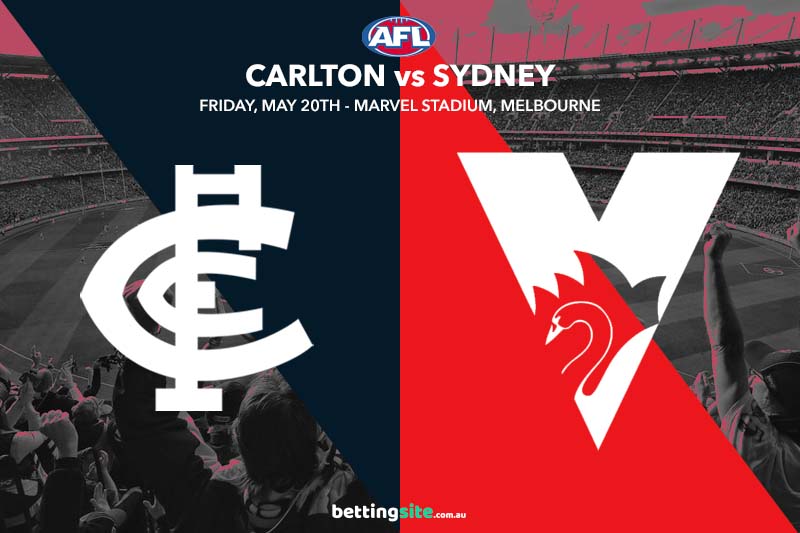 Two of the AFL’s top four hopefuls will battle at Marvel Stadium this Friday night, as the Carlton Blues host the Sydney Swans in what should be a riveting contest.

Both clubs were fantastic in round nine, as the Blues beat the GWS Giants in Leon Cameron’s last game as head coach, while the Sydney Swans obliterated the Bombers in a very one-sided massacre.

You do not need to be an expert to know these two sides are playing good football, as they both sit comfortably at the top end of the outright AFL Premiership winner betting market.

This contest will serve as an early preview into a potential Finals matchup later in the year, and we suspect both teams will treat this contest as such.

Michael Voss and the Blues are still missing a few key components heading into this game, most notably Harry McKay in the forward line and Marc Pittonet in the ruck.

Former GWS Giants and explosive backman Zac Williams was the most recent Carlton Blues player to be struck down with injury, as he tore his calf in last weekend’s victory.

John Longmire has far less to worry about from a selection perspective, as the only worry will be finding a replacement for James Rowbottom in the middle after he was handed a one-week suspension.

Two of the most in-form players in the competition will go head-to-head in the midfield this weekend when Patrick Cripps faces Callum Mills. Cripps is having a record-breaking season after finally getting his body fit and firing, while Mills has developed into a first-rate midfielder in his seventh AFL season.

Mills is the better of the two when it comes to the defensive aspects of the game, but Cripps is far more dangerous when he pushes forward. With McKay ruled out for the Blues, we would not be surprised if we saw Cripps push inside 50 and use his huge frame to act as a makeshift centre-half forward. It will be game over for the Swans if Cripps hits the scoreboard, but we are unsure if they have the means to stop the beast.

Carlton Blues to win by 1-39
Beating the Giants in what was a send-off game for Leon Cameron is no mean feat, especially considering Williams went down early in the contest and the Blues had to re-adjust their backline. Jack Silvagni stepped up for Carlton up forward and played an important role as a marking target, which he will need to repeat this week in order to outmuscle the Swans.

Chad Warner to get 25+ disposals
One of the youngest but most exciting players the Swans have at their disposal is Chad Warner in the midfield, as the bullish competitor has some extremely promising traits that make him elite. Warner has not even played 25 senior games, yet he looks so comfortable around the big bodied midfielders. His speed, power and competitive streak will be very useful against the stacked Carlton midfield, which should see Warner follow up his 32-disposal effort with another great game.

Patrick Cripps will lead his Carlton Blues to another strong win this Friday night under the bright lights, while Chad Warner will keep up his great form in the middle and help the Swans make it a tight contest.