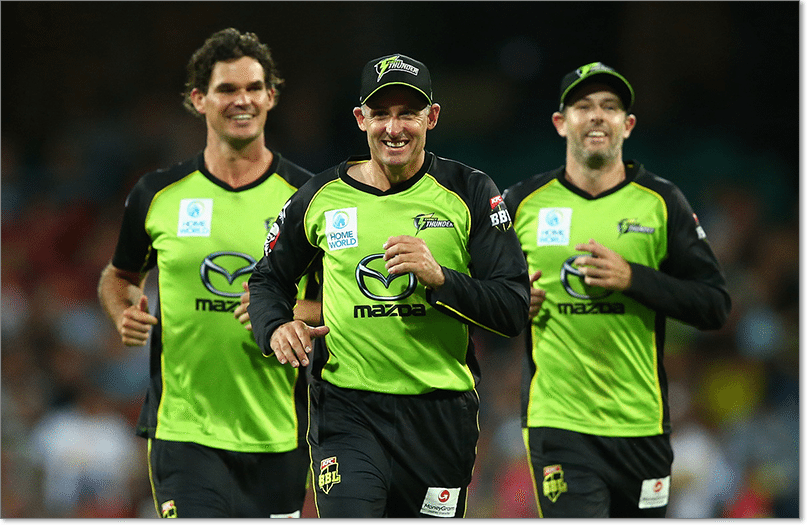 IN terms of recent form, you could hardly have picked a more lopsided match-up for the first knockout game of the 2015-16 Big Bash League finals.

Adelaide Strikers have set the pace from go to woe, dropping only one game in eight on their way to a first-place finish and a home semifinal.

That record appeared to be in jeopardy on Monday night when Chris Gayle smashed a half-century off only 12 balls as Melbourne Renegades chased a last-ditch finals berth.

But the Strikers managed to defend their total of 170 with relative comfort in the end, with spinners Travis Head (3/16) and Jon Holland (2/24) doing the job on a slow wicket at the Docklands.

Jono Dean (48 off 35 balls) was Adelaide’s star man with the bat, but the Canberra-based slogger is no certainty to make the final 11 for Thursday’s blockbuster at Adelaide Oval.

That’s because Mahela Jayawardene, who missed the last two matches of the qualifying phase with a quad strain, is in line to return at the top of the order.

Sydney Thunder will welcome back one or two big names of their own as they prepare for their very first taste of the Big Bash finals.

Jacques Kallis sat out the crucial derby clash with Sydney Sixers at the weekend, but the South African allrounder is expected to return for the trip to Adelaide.

Also back in the mix is the in-form Usman Khawaja, who has played only twice in BBL 05 due to international commitments with Australia’s Test and ODI squads.

Neither were required as the green half of Sydney smashed a season-record 202 in front of more than 38,000 onlookers at the SCG on Saturday.

As if that’s not enough of a morale-boost on its own, Paddy Upton’s men have one other significant stat up their sleeves: they are the only side to have beaten the Strikers this season.

As good as the Thunder were last weekend, and as important as the returning Kallis and Khawaja could be, it’s the Strikers who look most likely to meet either Melbourne Stars or Perth Scorchers in the final.

The Adelaide top order has only improved throughout the season, especially since Jayawardene replaced Craig Simmons as Tim Ludeman’s opening partner.

If either of those guys fail, you’ve got arguably the best hitter in the comp (Head) and the coolest accumulator going around (Brad Hodge) to steady the ship.

The likes of Dean, Jake Lehmann and Alex Ross provide plenty of quality hitting options in the middle order, too.

Then there’s the multi-faceted bowling attack, led by slower-ball specialist Ben Laughlin and the signing of the season, English leg-spinner Adil Rashid.

The Thunder have plenty of experience and strike-power themselves, as was evident during their blistering start to Big Bash League 2015-16.

McKay and Russell form arguably the best new-ball pair in the competition, while the 40-year-old Hussey heads a batting unit rich with both top-flight experience and explosive ball-striking.

It should be a cracker, but Adelaide will be very hard to beat in front of their unrivalled local support.

Even as retirement looms, Mr. Cricket continues to astound.

Four scores of 40 runs or more speak of Hussey’s consistency, focus and fighting spirit, all of which were on display during his typically clever supporting knock in the Sydney Smash last Saturday.

Should the Thunder pull off a stunning win away from home in their first BBL semifinal appearance, it would be no surprise at all if their veteran skipper was right at the heart of it.