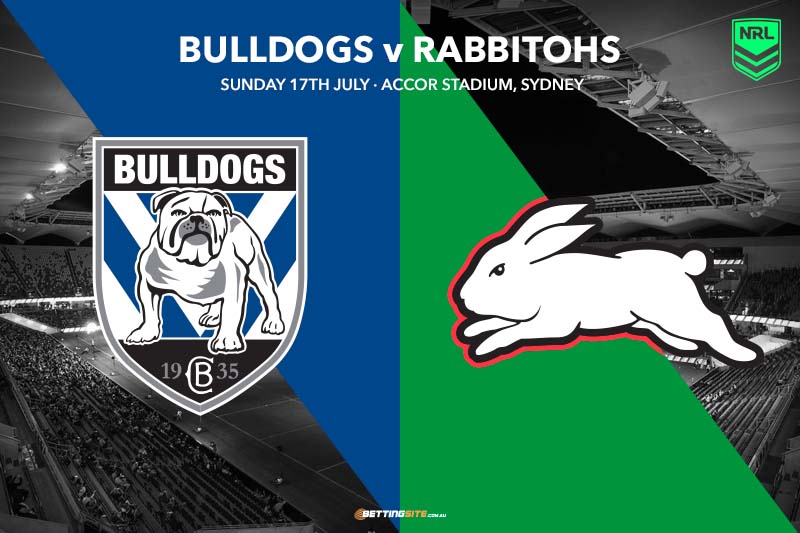 A huge Super Sunday of NRL wraps up at Accor Stadium as the South Sydney Rabbitohs take on the Canterbury Bulldogs. In their latest hit outs, the Bulldogs struggled to overcome a strong Sharks side in biblical rain. Meanwhile, the Rabbitohs downed the Knights in Newcastle. Both sides have had their ups and downs this season, can the Bulldogs cause an upset and begin a very late push for the finals? Or will the Rabbitohs get the win they need to push for the top four?

As far as team lists and late changes go, the Canterbury Bulldogs are yet to confirm that star five-eighth and New South Wales centre Matt Burton will take his place on Sunday. However, it has been confirmed that Aaron Schoupp will miss this match through Covid.

For the Rabbitohs, skipper Cameron Murray will be unavailable following the horrible concussion he sustained in State of Origin, and at this stage Jai Arrow will back up from his efforts for Queensland.

For the issues both these sides have faced this season, they have improved in recent weeks. The South Sydney Rabbitohs have been noticeably better, as the return of fullback and stand in captain Latrell Mitchell has been the catalyst to get this Rabbitohs side firing. Should the Rabbitohs get on the front foot and show how dominant they can be, a 13+ point win is well within their grasp at the price of $2.35.

Mitchell’s presence, ball running ability and aggression is what’s been sorely missed by the Rabbitohs in his absence. Mitchell also showed his ball playing skills, setting up two line break assists and two try assists in the match. Look for Mitchell to grow in confidence, as this confidence grows in his return from injury. This should present itself in try scoring form, of which Mitchell is incredible value to score 2+ tries at $6 Palmerbet.

Since Mitchell’s return to play, the Rabbitohs have scored 30 points or more, with one of those matches being against the Parramatta Eels. Some consider the Eels genuine premiership contenders, so this form bodes well for the Rabbitohs. The Bulldogs have been improving in recent weeks, but not enough to stop the Rabbitohs at their best. This should the Rabbitohs score 31-40 points in the match at $4.50 with the top betting sites.

On their best days, Alex Johnston and Josh Addo-Carr are two of the most exciting wingers in the NRL. Their speed, athleticism and try scoring abilities cannot be matched. However, each player has their issues in defence, be it in their decision making or their strength in defence. Both wingers will be as confident in their ability to score on their opposite number, as they will be concerned of conceding a try. It will not be the attack that separates these two, rather how they defend on their edge and individually to prevent their opposite number from scoring.