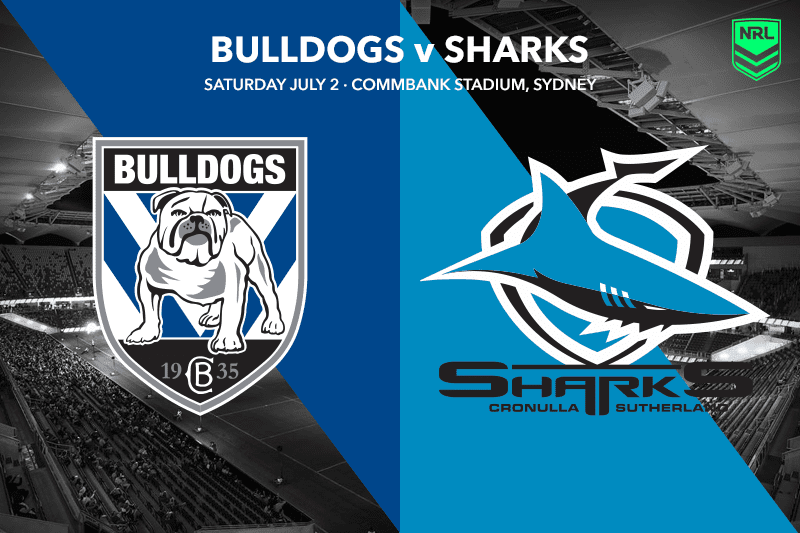 Super Saturday gets underway at Commbank Stadium and it shapes up as an intriguing contest between the Canterbury-Bankstown Bulldogs and Cronulla-Sutherland Sharks.

The Bulldogs have turned a corner following a diabolical start to their season, while Cronulla sit comfortably in the eight with a chance to lock up their place in the top four.

Canterbury will have Matt Burton return to the halves after a stellar State Of Origin debut and you’d have to think his confidence couldn’t get any higher. He will bring that belief back to a team who have started to find their way under coach Mick Potter, and it could shape as a dangerous weapon. You can already see what two comprehensive wins has done in the betting market, seeing almost a dollar shaved off the head-to-head price since the market opened over a week ago.

Another factor that can’t be overlooked is the continuity that is starting to happen under Potter. Earlier in the season under Trent Barrett the team went through changes on a weekly basis but this will be the third game in a row that is virtually unchanged. It’s helped the likes of Raymond Faitala-Mariner and Tevita Pangai Jr play some terrific football up front with a new-found rhythm, while Jake Averillo is having his best period in the NRL as a result of better play preceding him.

They are being given a +8 headstart at the line from the bookies and after two performances where they blew their opposition off the park, it could be a good bit of business to get on it. Matt Burton is $3.60 to repeat his Origin efforts and score a try, while Josh Addo-Carr at $2.30 feels like money for jam.

Cronulla’s bye week was less than ideal as COVID-19 ran through the camp and took out several players. It’s probably the most ideal time to deal with a distraction like this, but it will be interesting to see how they fair. Teams can be sluggish off the bye at the best of times let alone those recovering from the ‘spicy cough’. The $1.38 price would suggest they take care of business and considering they are at full-strength, they’d come under heavy scrutiny as a premiership contender if they didn’t get the two points.

Their last performance was an eight-point win over the bottom-placed Titans, while a few other games in recent times suggest they’re going through the motions a bit. There’s a real possibility they’ll be dragged into a fight and frustrated before going on to win, so the -8 head start could be touch-and-go. A two-leg multi for both Ronaldo Mulitalo and Sione Katoa to score can net you $3.29 and that feels like a good combo to go with.

The two Matt’s. Moylan and Burton are absolutely pivotal to both of their teams and you feel this game hinges on a big performance from one of them.

Cronulla win but their fail to cover the -8 line. Take the 1-12 and both their wingers to score a try.

Cronulla Sharks To Win By 1-12 Points