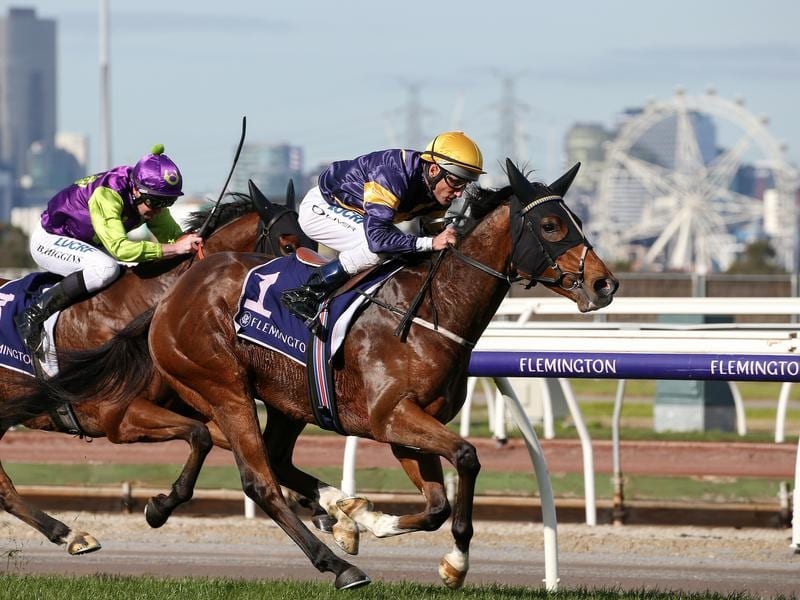 The Mike Moroney-trained Buffalo River can stake his Golden Eagle claims when he runs in Sydney.

Buffalo River is unbeaten in three Australian starts and the lightly raced import’s connections are now hoping the gelding can qualify for the inaugural $7.5 million Golden Eagle in Sydney.

Trainer Mike Moroney is planning to run Buffalo River in Saturday’s $500,000 Silver Eagle (1300m) at Randwick which is designed as a lead-in to the Golden Eagle (1500m) for four-year-olds at Rosehill on November 2.

The top three placegetters in the Silver Eagle will earn ballot exemptions to the Golden Eagle.

“He is going up to run in the Silver Eagle next Saturday if he makes the field,” Moroney said.

“He had a month out in the paddock and has had a couple of jump-outs to fit him up for it.”

Buffalo River made his Australian debut for Moroney in a 1400m-benchmark race at Ballarat in May, winning by three quarters of a length before scoring a dominant 3-1/2-length victory in a 3YO Handicap over the same distance at Sandown in June.

“I think he’s going well but he’s going to have to be,” Moroney said.

“He was only running against winter horses so it’s going to be a bit of a difficult one to measure up, but he looked impressive doing that and he has improved.

“Physically he looks like he has improved and he’s six months behind (southern hemisphere horses) so you’d expect him to.

“The first three get automatic entry into the Golden Eagle so that’s what we’re trying to do.”