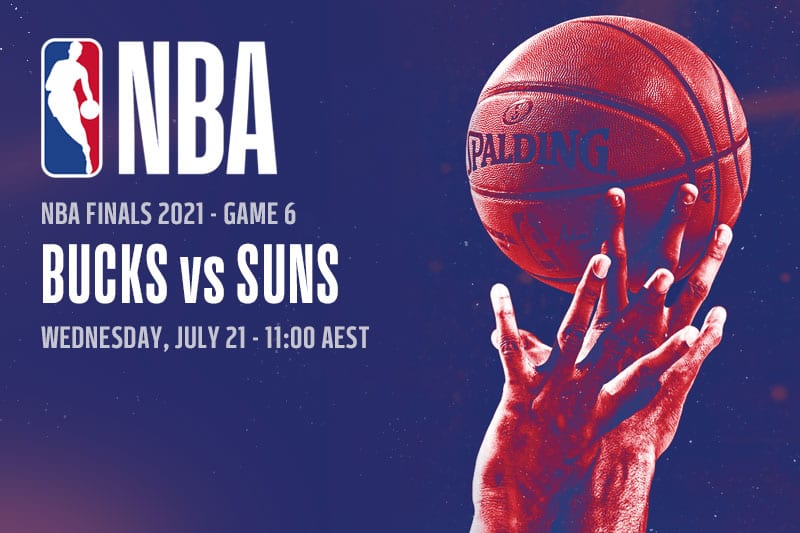 The Milwaukee Bucks are one win away from their first NBA Championship title since 1971, but the Phoenix Suns are going to fight for their lives at Fiserv Forum this Wednesday in Game 6 of the 2021 NBA Finals.

Game 5 went down to the wire in Phoenix, where the Bucks snatched a massive win on the road to claim their first lead of the series at 3-2. The Suns were unsuccessful in their first two finals matches in Milwaukee, but they did beat the Bucks at Fiserv Forum in the regular season.

Two-time NBA MVP Giannis Antetokounmpo has been unstoppable at both ends of the floor for the Bucks, averaging a series-high 32 points per game. Devin Booker has been the next best scorer across both teams, putting up 30 points per game in his first NBA Finals appearance. Chris Paul and Deandre Ayton have helped Booker out tremendously on offence, but they need to lift at the defensive end of the court to force Game 7.

The Bucks’ big three of Giannis, Khris Middleton and Jrue Holiday have been on fire during their three consecutive wins, with all three scoring over 25 points in Game 5.

We have not seen the NBA Finals go to Game 7 since the famous 2016 series between the Warriors and Cavaliers, but the Suns are every chance to tie up the series this Wednesday.

Many NBA pundits are giving the Suns no chance in Game 6, but we think they are the team to beat. The Bucks may have the home-court advantage and momentum, but the Suns have the higher potential in our eyes. If Devin Booker or Chris Paul can get off the chain on offence, anything is possible. We think the Suns will cover the line at the very least.

The Suns have a handful of players who are deadly from beyond the arc, but we think they will rely on Devin Booker this Wednesday. The Suns’ sharpshooters made 13 threes from just 19 attempts in their last outing, meaning the floor should be spaced well in Game 6. The best players will rise to the occasion in this contest, and we expect Booker to fire on all cylinders from deep.

Picking a winner in this match is going to be difficult, and we think it will be a close game either way. Devin Booker is primed for another scoring explosion, which should help the Suns cover the line. The best value for Milwaukee will be Jrue Holiday, who is playing 40 minutes per game and averaging 17.8 attempted field-goals.