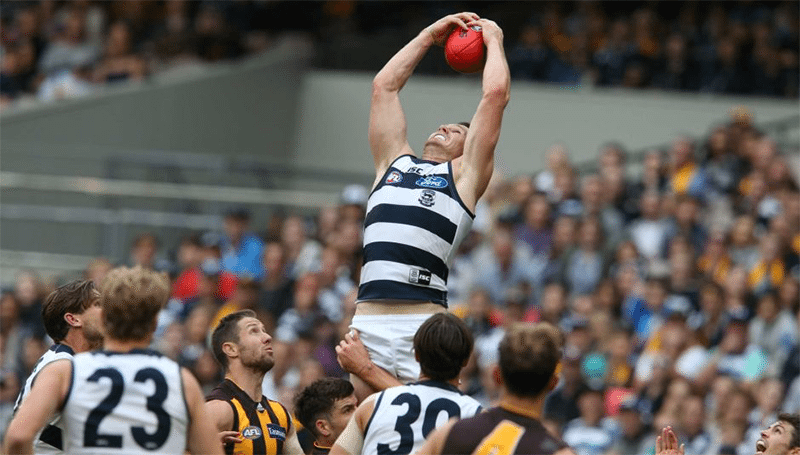 GEELONG superstar Patrick Dangerfield’s stellar start to 2016 has seen the midfield champ shorten to $3.75 to win the Brownlow medal at Sportsbet.com.au.

The Cats’ off-season acquisition has been brilliant so far this season and is the number one-ranked player in the competition according to Champion Data.

Dangerfield is at the shortest price of any player for the Brownlow since the beginning of the season.

The 26-year-old is a proven vote accumulator over the course of his career, amassing 97 votes from his 153-game stint at the Adelaide Crows.

Danger’s Cats have also shortened in the premiership market, coming into $5.50 at Sportsbet to be the second favourite for the flag.

Sydney Swan Luke Parker is the next best player in the Brownlow market at $6.00.

The stout Swan has been a revelation in 2016, taking control of a star-studded Swans midfield which also contains Josh Kennedy and Daniel Hannenbury.

Parker is ranked eighth in the league for total disposals and sixth for contested possessions.

One of the biggest sliders is Port Adelaide’s Robbie Gray.

The enigmatic midfielder was a $9 chance before the season began, but after missing the last fortnight through injury the former All-Australians odds have ballooned out to $51.00 at Sportsbet.

There is still no definitive timeline on Gray’s return to football, so expect those odds to move out even further if he misses a third straight game this weekend.

In what has become a reccurring event in 2016, Suns’ captain Gary Ablett continues to drift in the Brownlow market.

The one-time favourite for the medal ($6.00) has seen his pre-season Brownlow quote grow almost weekly to settle at $34 after seven rounds.

Sportsbet unconvinced on the undefeated Kangaroos

North Melbourne’s seven game win-streak to start the 2016 season has yet to make a real impression over at Sportsbet.com.au, which have the Roos as the third favourites for the minor premiership at $5.50.

Geelong is the clear pick to finish atop the AFL ladder at the end of the regular season at $2.10, while the Swans are the second best option at $4.

The Kangaroos are one game clear on top of the ladder after seven rounds, but the league leaders have the worst percentage of all the current top-five teams.

The Kangaroos are $8 to win the premiership.

Sportsbet has also opened a novelty market on North’s 2016 season.

Punters who believe Brad Scott’s men can finish the home and away season undefeated can get a $91 return on their investment.

Despite the lack of market confidence, Roos’ great Glenn Archer believes the current North Melbourne team has ability to emulate the feats of the 1996 Kangaroos’ Premiership team.

“I was only talking about that today, that it has the same feeling as 20 years ago, losing those prelims and doing the apprenticeship through the finals then cracking it in 1996. Hopefully this side can replicate that,” Archer said.

“It is still early and there is so much footy to be played, but we are on the right track. The biggest change this year has been the constant pressure for four quarters. They are just stifling teams.”

The Kangaroos would have to overcome the preliminary final stumbling block which has halted their last two campaigns, and Sportsbet do not believe they have the ability to do so.

Lance Franklin is the $2.75 clear favourite to win the Coleman Medal after seven rounds at Sportsbet.com.au.

The superstar Swan was at his absolute peak against Essendon on the weekend, booting six goals against Michael Harley who had previously not conceded more than two goals to an opponent in a match this season.

The man they call Buddy is one goal clear in the AFL goal scoring department ahead of the Gold Coast Sun Tom Lynch, who is at $3.75 to win the prestigious medal.

Lynch sits five goals clear of reinvigorated Roo Jarrad Waite who is $6 at WilliamHill.com.au to top the goal kicking tally for the AFL.

Adelaide teammates Josh Jenkins and Taylor Walker have seen their odds for the medal fluctuate dramatically in opposite directions after their narrow loss to the Dogs.

Walker – who started the season as a $9 favourite for the Coleman – is now at $41 while Jenkins has firmed into $17 after booting a career-best seven goals on Saturday night.

Jenkins sits alongside Jarrad Waite on 23 majors for the season, while Walker has only managed 12 in 2016.